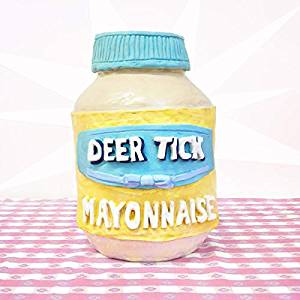 
Their 'Deer Tick Vol 1' and 'Deer Tick Vol 2' albums released in 2017 were a chance for the American alternative rockers to spread their wings and offer a glimpse of what they can do give a wide open palette. Their rootsy core alternated between introspective and reflective and into raw and waspish punkishness.

The 13 track compilation 'Mayonnaise' comes as a companion piece to those two albums. It contains in part alterative versions of songs from those two records (from Vol 1 to be honest) along with added interest in a few new songs and a handful of covers that were played on the Twice Is Nice Tour. In spite of a handful of new songs, the latter provide much of the interest as only cover versions can - which ones are chosen? how do they sound? how do they compare with the original?

Without wanting to dismiss that alternatives from 'Vol 1 / 2', turning the attention to the new material, once again, the uptempo and the atmospheric collide as the poppy bass led vibrancy of 'Hey Yeah' and in particular the raw and visceral lo fi wonder 'Spirals'. The pair contrast markedly with the easy vibe of 'Old Lady'. Brief interludes come in 'Strange, Awful Feeling' and the cool lounge jazzy 'Memphis Chair' and as evidence of where they are right now, see Deer Tick securing their wide ranging alternative palette. It's especially the case with the pedal steel countryisms of album closer 'Cocktail' that features Spencer Cullum Jr of Steelism.

However, back to the interest of the cover versions. The Pogues' 'White City' crosses early REM with the Irish folk punk with even a nod to a McGowan like snarl. George Harrison's 'Run Of The Mill' from the sprawling 'All Things Must Pass' and the cover of Ben Vaughn's 'Too Sensitive For This World' both offer what Eagles called a peaceful easy feeling. The pick of the covers and the set though is their take on the Velvet Underground's 'Pale Blue Eyes'. Extending into just over seven minutes, it's a perfect match and done pretty faithfully in setting up a cool acoustic groove with a track from an iconic band reinterpreted by a contemporary indie style. One that confirms 'Mayonnaise' as an interesting and appreciated add on.