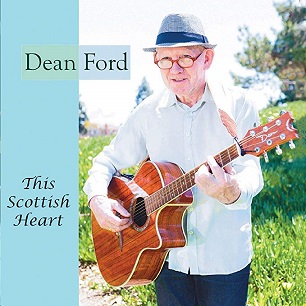 
I received this double album to review just before Christmas and had a quick listen to it. I then sat down on New Year's Eve to listen to it properly and start the review. I was immediately struck by the variety and breadth of music on it and by Dean's clarity of voice and the enduring skill of his songwriting. Almost every genre of modern music is covered in one form or another.

Like many people, I became aware of Dean as the lead singer with Marmalade back in the 60's and 70's. At that time, they produced a song that I still regard as one of the best of that time. "Reflections Of My Life" which sounds just as good today. After Marmalade, he also sang with one of my all-time favourite bands, The Alan Parsons Project, in addition to a number of other well-known bands; all of this whilst pursuing a solo career! This morning I awoke to the news that Dean had died and I felt rather empty. I wanted to tell him in my review how brilliant he still is but it is too late now. I just hope he realises what an extraordinary talent he had.

"This Scottish Heart" is a wonderful tribute to Dean and is filled with strong melodies and superb heartfelt lyrics from first to last. Primarily recorded in his California home's kitchen on a laptop with Dean playing most of the instruments, you would never guess the location of the studio from the quality of the production. Dean's voice has always retained a strong emotional feel to it and this album affords him the opportunity to demonstrate his skill as a solo performer of outstanding ability.

Dean was never afraid to write lyrics that reflect his personal situation and the opening track on the album "A New Day" is about his battle to overcome alcoholism which he achieved back in the early 1990's. There are too many emotions and stories on this album to write about each one but I defy any listener not to be moved by Dean's music and the story of his life.

Fittingly, the last track on the album is a 2017 reworking of "Reflections Of My Life" and I cannot think of a better way to end this musical life story. Dean lived and experienced life and has that rare ability to turn his trials and tribulations into very listenable music.

Most people want to leave a legacy when they depart this life and I am sure that Dean was no exception. He can now rest in peace knowing he has left something that will be listened to and admired for years to come. His music and lyrics will live on and I hope others will love his music in the same way that I do.

RIP Dean and thank you for the music and memories.

Reflections Of My Life