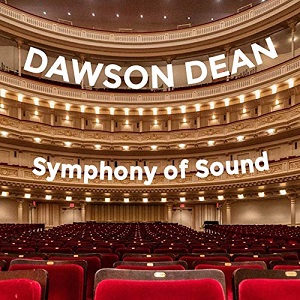 
Symphony Of Sound is the second album from the Staffordshire / Moorlands duo of Graham Dawson and Chris Dean, it is so accomplished that you immediately feel as if this partnership has been writing together for decades, the harmonies are well rehearsed so that they become effortlessly delicious. You melt as the songs embrace and wrap themselves around your subconscious. You feel the influences behind the self penned tracks are just out of reach, the Eagles, The Doobie Brothers, Ralph McTell, the Kinks to name but a few.

Kicking this release off is the Country Rock influenced "A Million Reasons", driven at a pace by the bouncy bass of Geoff Berrow and Dan Rowley on drums. The song is lifted by the wistful pedal steel of Chris Hillman who has earned the title of AMA UK Instrumentalist of the Year 2019. Hillman's playing is reminiscent of the sadly missed Gordon Huntley and the song would fit seamlessly into any of the original Matthews Southern Comfort's output.

"A Ship on the Horizon", is a positive, poppy, rocky, keyboard and guitar led message that "hope wins in the end".

And perhaps that hope is needed. The dark underside of the Potteries is exposed in "Caledonia Road", each town and city has those streets that it's best to avoid. A bittersweet Eagles influenced experience that you could listen to on repeat forever.

Staying with the American theme "All About Life" is pure Doobie's / Steely Dan funk, fantastic harmonies and tasteful guitars from Dean and Dawson yet it's a full band sound that should really be mentioned. That and the sentiment "Do what you love, Love what you do". You cannot imagine anybody involved in this record does not love their input. Carpe Diem, the band do just that.

The Domesday Clock ticks, "A Minute To Midnight" is doom laden, inward focused, are we really there yet? Do we really want it? No. A borrowed "You really got me" riff completes the picture.

Ballads aren't ignored "Calling Out Your Name", a love song, whilst the influence of renowned folkie Ralph McTell resounds through the picture of homeless people in "Different Light" and how they are ignored by passers by.

"Song Of The Sea", a traditional sounding fisherman's tale of coming home to your love, the close harmonies and choir (Angela, Dan & Megan Lazenby, Paul Hancock and Alison Dexter) really make this song stand out, aided by the accordion of Nick Barber.

To close the album is the title track, a feel-good, smiley, love song, soft rock, foot tapper that fades with the choir singing a simple refrain. Guaranteed to leave you in a good mood with a smile on your face.