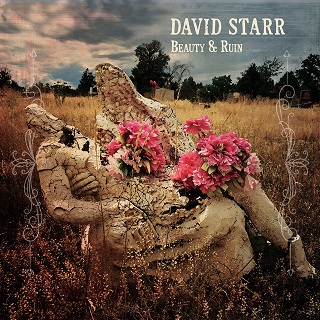 
The founder of Starr's Guitars, now based in Cedaredge, Colorado (where they actually have a David Starr Day), Starr is also a rather fine singer-songwriter in the classic tradition of artists such as James Taylor and Joni Mitchell, his well-grained voice evocative at times of vintage Neil Diamond. Having opened shows for John Oates of Hall & Oates fame, the latter went on to produce both 2016's Love & Sabotage and the following year's EP. He's back behind the desk again, as well as contributing guitars and vocals alongside such names as Dan Dugmore and Greg Morrow, for this, Starr's ninth album.

The songs are based around Of What Was, Nothing Is Left, the final novel to be written by his grandfather, Fred Starr, in 1972 (and republished to coincide), telling of tragedy, family dysfunction, loneliness, jealousy, heartbreak and revenge in late nineteenth-century rural southwest Arkansas, and are mostly co-writes with some of his and Oates's favourite songwriters inspired by the story, its characters and situations, though not always appearing in the same order of events.

It opens with one of several Oates/Starr tracks, 'Laura', a yearningly sung, acoustic strummed, pedal steel stroked tale of unrequited love based around the novel's relationship between the young Frank James, recently arrived in Laurel Creek from Ohio, and the girl of the title, the new wife of his employer,m the Captain, as Starr sings "Laura you'll never be mine…you belong to another, the truth is unkind".

It's followed by the magnificent strings-adorned title track, a collaboration with Dana Cooper, who sings background vocals, on a number inspired by the caption to one of Cooper's photographs, the idea of finding beauty in ruins one of the novel's themes.

The second Oates co-write, 'Rise Up Again' actually has nothing to do with the novel, rather it was inspired by a dream Starr had of his father and grandfather the night before having the same surgery his dad underwent before he passed, the song, a moody number that evokes Michael McDermott in parts, digging into the idea of not going before your time is due.

The notion spills over into 'Bury The Young', written with Telisha Williams from Wild Ponies, a suitably wearied ballad about how "It's not right for the old to bury their young" that, drawing on the characters of Jody and Cindy, respectively Laura's son and cousin, in the book, references the biblical store of King David weeping for Absalom.

Clocking in at just over six-minutes, borrowing the novel's title, 'Of What Was, Nothing Is Left, another Oates co-write, offers a summary of the central plotlines to be followed by the atmospheric percussive sounds and cello accompaniment of 'The Cracks Of Time' with Shelley Ray Korntved and another song focused around Cindy, for whom Frank falls, a character "broken on the wheel of circumstance", so busy caring for others they end up living their own life through the cracks.

The Oates and Starr partnership is joined by Jim Lauderdale for 'Road To Jubilee' (which also features on the Medicine Show compilation, The Looking For Canada Collection 2020, which is well worth checking out), a twangy dose of fiddle-flavoured, drum thump anthemic Americana that finds Frank daydreaming during his time at Arkansas' historically cruel Cummins Farm penitentiary, framed for murder.

The second longest number, the bluesy strum 'My Mother's Shame' is a solo Starr composition, which, sung from Jody's perspective, graces the novel's theme of shame ("it's my cross to bear to carry this broken name"). The album then enters the final stretch with Wood Newton contributing to 'Fly By Night', a dose of punchy alt-country hooks centred around the novel's travelling salesman whom Laura sees as the means to get the child she longs for, and whose husband seems incapable of giving her.

That story and its bitter legacy's is continued with Irene Kelley's mid-tempo ballad co-write 'Laurel Creek', a number that ends in suicide by drowning as "Southern voices sings 'you're finally free'", the album ending with the last Oates/Starr track, 'I Don't Think I'll Stay Here', a muscular, musically swelling number with some fierce electric guitar about how you can't cling to the past and things that have gone and of the need to move on, physically and emotionally, to avoid becoming another of the ruins. One of my albums of the year, it should be on your list too.