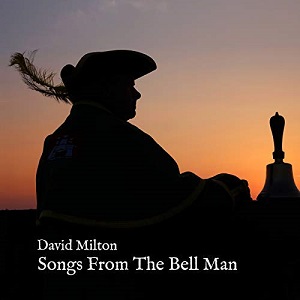 
I have often said that the quintessential folk album is part geography lesson, part history lesson and a murder, or at the very least a death and David Milton's debut album hits all three points, right in the bullseye.

Raconteur David Milton is amongst many other things Watchet town crier, hence the album name, but he's a whole lot more than that. Amongst many other roles he is also a Punch & Judy man, folk club runner and involved in the local shanty scene.

I first met David at the launch of the Ange Hardy album, "Esteece" on which he is a contributor and it's no coincidence that self same Ange Hardy makes her debut behind the desk here and a damn fine job she makes of it.

There is a very local and personal element to the songs on here, many are self penned and a number that aren't are about the area, but crucially they do a lot more than keep folk memory alive, they live it, keep it relevant and turn it into short stories to hand down and pass on.

They are recorded with a passion that show they matter and matter a lot. This is tradition not only living in the heart but from the heart and that's what takes the album from being a really good record for local people into an album that has far broader appeal, national even international.

This is traditional folk in one of it's purest forms, as an oral record. David Milton reminds people of the old stories and adds to them. We may not have worked at Watchet Paper Mill, we weren't aware of the local slang that associated with the jobs there, but we all have local examples we can relate to, they just haven't been so eloquently documented in song.

All of local life is here, death, birth, the adjustment to different ways of life, as one opportunity closes another opens. Watchet may not be as important now as it once was, but it is still here and has as much right to be documented in song as anywhere and David has the eloquence to do that and do that in a way that will help those stories and folk memories survive. This is one of the best folk albums I've heard in a long while. "Songs From The Bellman" is an album to shout about.

The Last Shift In