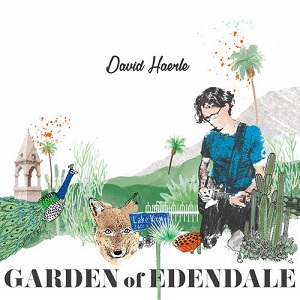 
Titled for the original name of LA's Silver Lake, Echo Park and Los Feliz neighbourhoods, Haerle's debut album is firmly rooted in the sound of sunny California pop but also influenced by the country music to which he was exposed as a child, his father the co-founder of CMH Records, the independent LA country and bluegrass label. When his father passed, Haerle took over running the business, serving as President of the CMH Label Group for 27 years.

This finds him on the other side of the counter, so to speak, his music equally informed by the sound of 70s rock and the Fender Stratocaster he acquired when he was just 13 and which is also the subject of 'Shining Star', on which he narrates his love affair with his guitar, although he's actually playing a Jimmy Page Edition Les Paul.

He opens with the jangly 'Finding Natalie', a song about his first love, Luanne Hornzy's violin cascading over the choppy sunshine pop, moving into the rhythmically driving 'I Have A Crush', a love letter to LA that, delivered in a sort of Lou Reed semi-spoken narrative takes you on a tour of the neighbourhoods and cities in and around L.A. County, the track developing into a guitar jam finale.

A duet with Bess Harrison, Women Make The World Go 'Round has a choppy groove somewhat reminiscent of the Doobies, a feminist-based song that celebrates the role of women in everyday life but which also includes a specific verse commemorating the Women's March on January 21, 2017.

A personal note informs the circling guitar pattern of 'Tell Your Story', drawing on his struggles with OCD as well as a family history of alcoholism, and how sharing your story can help you and others find the strength and hope they need to come out on the other side. A similar idea is at the core of the violin-coloured 'Do You Know Surrender?' about finding yourself at your lowest point and the need to let go of the idea what certain situations or conditions have to be met before you can be happy, and being open to looking at approaching life from a different perspective.

It's back to being a guitar geek for 'Play It Like The Record', a bluesy rock funky groove (with clavinet) of a Dire Straits persuasion that esessentially about wanting your guitar heroes to play the licks the way they did when they made the record and not frilling them up with fancy live fret wanking.

Another paean to LA, 'Glendale', which adopts a kind of Lou Reed strut, celebrates the titular neighbourhood, a personal connection being that it was where, back in 7th grade, his first girlfriend lived, the song ultimately about those places that hold memories of our earlier lives.

An instrumental, 'The Tone That Got Away' is very much a musician's track, a bluesy improvisational guitar piece edited together from multiple takes in an attempt to recapture the original sound of the initial backing track. It ends with two lengthy cuts. Driven by a flurrying riff and a racing drum beat, 'Tracer' is about creating something of your own rather than copying others,the track breaking into a lengthy twangy guitar solo midway that transforms into the extended playout. Another instrumental, 'Everything I Ever Wanted' is the longest number, crafted around the musicians in the studio riffing off one another to form a funky guitar jam that surely owes a debt to the likes of the Grateful Dead and the Southern blues rock improvisational outfits of the 70s.

It's pitched at a decided niche audience and probably works better in a live setting where he and the musicians can cut loose, but there's some solid musicianship and song craft to admire here.

Do You Know Surrender