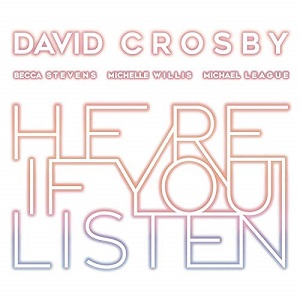 
To say that David Crosby is in the middle of a creative renaissance would be a vast understatement.

In the 43 years between 1971 and 2014 he released 3 solo albums. Not exactly prolific, but in the 4 years since 2014 , he has released a further 3 [Croz, Lighthouse and , my favourite , Sky Trails]. This amazingly productive run now continues , with, probably the best of all , “Here If You Listen”.

It is not strictly accurate to describe “Here If You Listen” as a Crosby solo album because it is , in reality, a collaborative effort with 3 other magnificent musicians, Becca Stevens, Michelle Willis and Michael League [of the band Snarky Puppy] , all of whom appeared on the “Lighthouse” album and tour.

As a collaboration , this album works incredibly well , with all 4 artists contributing lyrics, music and vocals.

The musical landscape of this album is set by the opener “Glory”, with its shifting melodies and achingly beautiful vocals in a predominantly acoustic setting , with no drums to be found. The four vocalists blend seamlessly into each other to create a sublime entity.

“Vagrants of Venice” is Crosby’s vision of a dystopian , post-apocalyptic future where “wild people, nearly feral” live on “what they can find”.

Both “1974” and “1967” are based on old demo tapes by Crosby. The latter is a gorgeous piece in which Crosby developed the melody whilst the tape was running. This [mostly] wordless song has touches of Joni Mitchell and would not sound out of place on Crosby’s debut solo album “If I Could Only Remember My Name”.

“Your Own Ride” is a wonderfully touching song in which Crosby , who has been “thinking about dying” , gives advice to his son [ “truths I give you my child, to take with you on your own ride”]. Bill Laurance [also of Snarky Puppy] makes the only guest appearance on the album with some lovely piano.

Becca Stevens is a wonderful singer and guitarist , as evidenced by her excellent album “Regina”. Becca can be heard to great effect on “I Am No Artist” , a poem by Jane Tyson Clement , on which she sounds very much like Blue-era Joni Mitchell , which is no bad thing at all.

The other female vocalist in this quartet is the talented Michelle Willis , who was part of Crosby’s “Sky Trails” band on their recent tour , which I was lucky enough to catch in Manchester in September. At that show, Michelle and the band performed her song “Janet” , about an unfaithful lover – “You’re pouring your sweet love into a bitter cup”. Played live this song had a distinct Little Feat flavour to it , which is echoed in the album version here.

This superb album concludes with a nod to the past , in the shape of a stunning makeover of Joni’s “Woodstock” which was released as a single by Crosby, Stills, Nash and Young in March 1970. This new version sounds fresh and vibrant , with sublime vocals by Crosby and company.

As it is almost the end of the year ,it is time to think about album of the year and live show of the year. For myself, David Crosby wins hands down in both categories, for the superb “Here If You Listen” and his wonderful “Sky Trails” concert in Manchester. Not bad for a 77-year old!