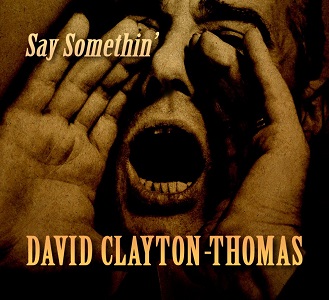 
Let me confess to two things. I didn't know that David Clayton-Thomas was born in Surrey, or indeed, in the UK, the son of a Canadian soldier and a British music student, That's forgivable. Less so is that I didn't know that he was still making music, by memories of him being as the leader of jazz rock outfit Blood, Sweat and Tears back in the early 70s, famous for numbers such as their covers of 'You've Made Me So Very Happy' and 'God Bless The Child' and his own 'Spinning Wheel'. In fact, finally quitting the band in 2004, he's notched up some nine albums under his own name (as well several prior to that).

So, head duly hung in shame, let me say this is a bristling collection of politically potent numbers delivered with a voice which, while possibly not quite the piledriver force it was back in the early BS&T days, can still raise Richter-scale tremors, though, having said that, the opening number, 'Burwash', has him in smoky bluesy prowl mode backed by slide guitar licks. Given his early encounters with the correction system,, it likely has a degree of personal feedback in a lyric about discovering music behind bars and starting up a band as a way out of hell and getting a gig courtesy of Ronnie Hawkins and "singing the blues with Levon and the band" (on a historical note, there's no record of him ever being a member of The Hawks).

Penitentiaries also inform 'The System', a jazz-blues textured number which, like several others, has the feel of something from an intimate 70s social issues off off Broadway production as he talks of how the youth justice system is broken way beyond repair with "the same kids getting arrested over and over again", the system working against rather than for them. While a touch retrospective politically speaking, the six-minute plus 'Dear Mr Obama' is an organ-fuelled slow burn gospel sway ode to the former president's call for coming together and thinking before you speak and how "anger don't make you stronger and kindness don't make you weak". Not that the current incumbent at the White House doesn't also get a song, fittingly half the running time, with the suitably lyrically scathing accordion-led 'The Circus', delivered with a fairground carousel sway, where "the president pays off a porn star", in the sort of story you couldn't make up.

Moving back a few tracks, again with a carnivalesque sway, 'King Midas' is, as you might imagine, a warning about being blinded by greed, complete with a swayalong crowd friendly chorus. The musical mood shifts to something more muscular with the mid-tempo blues 'Never Again', a number written in response to the spate of high school shootings in America, compared to the lack thereof in Canada, which was apparently banned from being advertised on Facebook for being too political.

The social commentary continues with the mid-tempo metronomic rhythmed 'This Town' (a number which vaguely conjures Elvis Costello), though he might equally being sing of social media in the lines "this town runs on rumours and dangerous dialogue", where "you can't see the fire for the smoke", concluding that "if you need a friend in this old town better get yourself a dog!"

'The Precipice' is the album's bluesiest number with its steamrollering drum rhythm, heavy bass and wah wah effects, an edge of an environmental apocalypse where we're "cheering from the brink" number featuring a searing guitar solo from Eric St. Laurent.

It end with, first, the nagging blues rock groove of A Bright Shining City, a number attacking the divisiveness propagated by the Trump regime, recalling that "we tore down a wall in old Berlin and now we're building one here" in fear of the other, the title serving reminder of what, in the big chorus, the USA once stood for as a "beacon of freedom". And, finally, a piano ballad led by Lou Pomanti, 'God's Country' is nothing more or less but a love song to Canada, an upbeat affirmation in the wake of the darkness across the border elsewhere on the album.

And When I Die