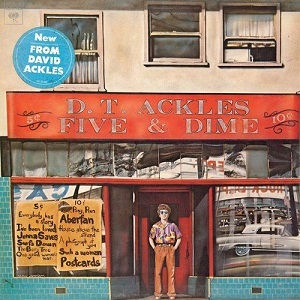 
All things being equal, David Ackles should have been as well-known and successful as the likes of Leonard Cohen, Randy Newman and Scott Walker.

However, Ackles never achieved that level of commercial success and remained a well-kept secret despite the fact that he was greatly admired by music critics and fellow songwriters such as Elvis Costello, Elton John and Phil Collins.

Ackles was brought up in a theatrical family and performed in vaudeville from the age of four. He was also a child film star for Columbia Pictures and later earned a Masters degree in Film Studies.

Subsequently , Ackles went to work for Elektra Records as a staff songwriter and started to record his own songs. He recorded three albums for Elektra , “David Ackles” [aka “Road To Cairo”] in 1968, “Subway To The Country”[1969] and , in 1972 , his epic masterpiece “American Gothic”.

Despite rave reviews [ Melody Maker called it “a classic”], it was not a commercial success , only reaching number 167 in the US charts. Despite the critical acclaim for “American Gothic”, Elektra dropped Ackles from their roster.

However, Ackles had a loyal supporter in the legendary president of CBS Records, Clive Davis, who signed him up to record the successor to “American Gothic”, the album now under review , “Five & Dime”.

Unfortunately for Ackles, just as the album was due to be released in 1973 , Clive Davis was summarily dismissed by CBS in a dispute over expenses , and “Five & Dime” sunk without trace, which was a great pity because it is a fine piece of work. Sadly, it was Ackles’ last album release , although he continued writing songs and screenplays and teaching musical theatre. He died in 1999 ,at the age of 62.

Although it might not be as grand as his “American Gothic” masterwork, “Five & Dime” has some marvellous songs ,covering a diverse range of subjects ,which highlight Ackles’ gift for wry observation , matched by his great skill as a musical arranger.

For example, in “I’ve Been Loved” , he portrays the humdrum lifestyle of everyday lonely people but ,in contrast to Paul McCartney’s Eleanor Rigby , these people have some meaning in their lives because they were ,at one time, loved.

In “Aberfan”, Ackles dramatically ,yet poignantly, describes the dreadful disaster in which 116 schoolchildren and 28 adults died when a coal tip collapsed onto a Welsh school. The chilling arrangement and acutely observed lyrics convey the harrowing nature of this shocking tragedy.

The uptempo arrangement of “Run ,Pony, Run” belies its dark subject matter, the slaughter of horses as food for humans, something which clearly appalled Ackles.

Not all of the songs here have such dark themes, the last four songs on the album “House Above The Strand”, “A Photograph Of You”, “Such A Woman” and “Postcards” are all relatively straightforward romantic songs featuring Ackles’ distinctive lyrics and arrangements.

One anomaly , which sticks out like a sore thumb , is a bizarre but hilarious pastiche of Surf Music called “Surf’s Down” ,which lampoons the surfing lifestyle and the music of the Beach Boys and Jan and Dean. Strangely , both Dean Torrance and Bruce Johnston [of The Beach Boys] made contributions to the track!

Although David Ackles only recorded four albums , he was a major talent, and it is most pleasing that this, his hitherto overlooked and underrated final album , is once again going to be available, as it is a superb piece of work which deserves much greater recognition.