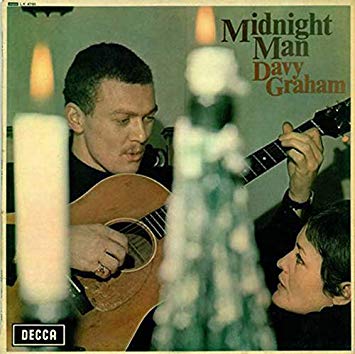 
It is fair to say that Davey Graham's influence on modern acoustic guitar playing cannot be overstated. He not only provided guitarists with the finger-busting right of passage instrumental 'Angi', but also devised the common alternate tuning DADGAD, which has become the standard for many Celtic, Irish, and finger-style guitarists.

If those two gifts to the guitarists of the world weren't enough already, his combination of folk, blues, jazz and world guitar styles, as demonstrated on his debut album 'Folk, Blues & Beyond' and, particularly on his collaboration with Shirley Collins 'Folk Roots, New Routes', opened the door to a style of folk guitar accompaniment that was not tied to simple chords, paving the way for players such as Bert Jansch, John Renbourn and Martin Carthy to take his ideas and run with them.

In many ways Graham's influence has always outshone his music, something which this recent spate of re-issues aims to address. Originally released in 1966, second album Midnight Man essentially carries on where Folk, Blues & Beyond left off, opening with the jazz-tinged 'No Preacher Blues' a rarity in Davy's catalogue being as it is an entirely original song.

The swinging jazz trio arrangements from Folk, Blues & Beyond are present on Midnight Man and although the heavily reverb-d vocals and 'Swinging Sixties' production values haven't aged particularly well, it's easy to look past this when you're rewarded with the stupendous performances that grace nearly every track.

Graham's take on Stormy Monday aptly demonstrates why his guitar playing was so revelatory and it heralds the start of a run of four tracks that are really the heart of this record - Money Honey, Walkin' The Dog and Fire In My Soul all feature tight arrangements that groove and swing without straying into Austin Powers territory and, though Davy was never celebrated for his vocal prowess, he delivers these tracks with a commitment and passion that counters the odd flat note.

The album's not perfect (the ill-advised cover of 'I'm Looking Thru' You' from The Beatles Rubber Soul album is a marked blip) and listening in 2019 it's sometimes hard not to overlook the production and but, on release in 1966, it must have been a revelatory and incredibly hip record - Graham's combination of jazz, folk and blues techniques into one all-encompassing guitar style, best demonstrated on his adaptation of Junior Mance's Jubilation, will always stand the test of time, and ultimately his performances on the instrument are so great that they can transcend the trappings of their studio production.

Those looking to discover Davy Graham's music for the first time might be better served by starting with Folk, Blues & Beyond or, better yet, tracking down the 'After Hours' album - a reel to reel recording of Davy performing in a Hull University dorm room that presents his mix of instrumentals and blues in a more relaxed and intimate manner - but Midnight Man is still a great album by an exceptional and influential performer.

Fire In My Soul