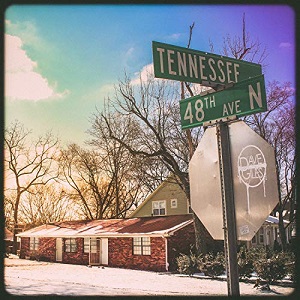 
For his second album, London-based singer-songwriter Giles headed to Nashville, recording it live to two-inch tape in a studio on the corner of, yes, Tennessee and 48th Street, working with musicians such as Candlebox bassist Adam Kury and Kevin Haaland from Skillet on electric guitar.

As you might assume, this is Americana through a British filter, opening with the poignant slow waltz parent-child Alzheimer's-themed 'Child Again', Kevin McKendree on organ. Shoebox picks up the tempo for some ringing guitar and a steady drumbeat, again chewing on a theme of nostalgia, younger years and shedding painful memories of a broken romance as he sings "I wish that I could lose/All the thoughts that lead to you/I'd throw them underneath a bus/Out with all my broken trust."

From the past, upbeat love song 'Whiskey and Daffodils' looks to the future ("will we have neighbours who won't mind the noise? Will our nieces and nephews mind sharing their toys?"), taking each day as it comes and how things will be all right even if best laid plans that fall apart.

It hits a solid alt-country stride with Jared Sandhy laying down the drum beat for 'Devil In A Green Dress', which finds him "singing songs in dark rooms" and, feeling all alone, vulnerable to the temptations and trap of "the apple in my Eden" and "such a beautiful thorn in my side." That the temptress in question is Mary Jane, slang for marijuana, might possibly lend a different interpretation.

Opening with Keith Richards distorted guitar swagger, 'Just Another No One' is a rockier track, and while the songs may have been written in London, this finds him a Nashville nobody, "just another barstool on Broadway", looking to sing his song and tell his stories, the lyrics giving the nod to Billy Joel's 'We Didn't Start The Fire'.

Americana influences are put two one side in favour of pop sensibilities (The Lightning Seeds, Dodgy, Bluetones) on the self-seeking 'Who I Wanna Be' ("I wanna see the path to be a better man") while the spirit of Bowie spacewalks through 'The Last Man On The Moon', a tribute to the determined stragglers in a world where only those who come first are remembered, the track featuring audio from Apollo 17, the last of the moon programme missions. It doesn't matter if you come in last, the point being that "you've got to climb it if it's there."

Or then there's the Coldplay/Robbie Williams echoes to be heard on the slow strummed 'Taken Too Soon', a particularly poignant big building ballad that was written in memory of a fan with whom he'd struck up a friendship, receiving a phone call one day to say she'd dropped dead at work. Giles was asked to sing at her funeral and the song is his tribute.

Gradually moving from a slow strum to add harmonica, organ, tambourine and glockenspiel as it swells to a big finish, the relationship in crisis 'No One's Perfect' doesn't quite work, but it ends on a high with the Bowie meets Floydian atmospherics 'Demons', a steady slow drum beat underpinning the gathering Eastern guitar swirls, fiddle shaker and massed voices as it ebbs to an acoustic close as he sings "you're the angel on my left/Fighting the devil on my right/ And when I'm stumbling in the dark/You can be my guiding light."

Crowdfunded, his fan base raised an amazing £25,000 to make the album. It was money well invested.