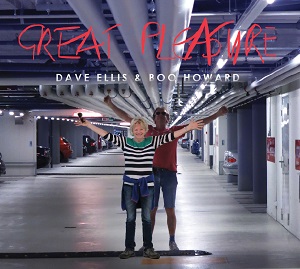 
There's a comfort here. A familiarity you feel. Fourteen tracks split into two sides, suggesting we are back into the days of vinyl. Perhaps. Although this is the CD release, the eighth such album that the duo have released over nearly twenty years.

It's accomplished songwriting, sweet harmonies, catchy choruses, impeccable playing, perfect pitch and faultless production, you could be forgiven thinking that you were listening to a major label release.

From the opening track "Great Pleasure" it rewards, a tale of a reticent performer overcoming shyness, a toe tapping, thigh slapping, gem of a song that is lifted by some subtle yet lovely guitar.

No surprise then to find that Dave Ellis, back in the Seventies, was listed as one of the Top 6 guitarists in the world by no less than respected music mag Melody Maker.

By the second track, "Fallen Angel" we are treated to Boo's beautiful vocals that are soulful and restrained, the pair seamlessly share voices throughout the tracks and both are a joy to listen to.

"All That There Is" takes melancholy to a new level, a reflection of the old adage that's there's more to life than money "I'm just into loving, that's all that there is".

Heartache, trust and foolishness are examined in "Walking Wounded" it has the feel of much of the music that Iain Matthews was successfully making for a large part of his folk rock career.

"My Own Sweet Way" adds a touch of blues to the equation, "Gunga Din" is an up tempo jolly, "Don't Know Why" addresses the insecurities of a relationship where one relies so much on reassurance to get through the day.

Our indifference to those in need, the subject of "Refugee", the blind eye turned by those who could do more.

"All Here Together" a closing song for the numerous folk clubs the duo play, a singalong remembrance to say goodnight.

"Great Pleasure" will be lapped up by those that have seen the hard working Southern Based pair without a shadow of doubt. It's exceptionally well done music. The crying shame is that something this good stands little chance of having the success it really deserves. Although like many performers I suspect the fact they can make their music and be appreciated for what creativity they possess is the real driving force.

Dave Ellis & Boo Howard, a team you'll want to support. You'll get a great idea if you watch the video.