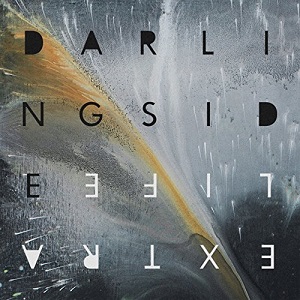 
Their second album, 2015's Birds Say, was one of the year's best and remains a regular visitor to the CD player, last year's live set in Birmingham, the quartet gathered around a single microphone, was one of the best things I saw all year. So, it pains me to say I'm a touch disappointed with this eagerly anticipated third full length release.

Its predecessor dispensed with the drums featured on the debut and focused on the superb harmonising between the band's four members, guitarist and banjo player Don Mitchell, violinist,mandolinist Auyon Mukharji, guitarist Harris Paseltiner and bassist David Senft, the best of its kind up there with Fleet Foxes, the Beach Boys, CS&N and Simon & Garfunkel, on its collection of beautifully crafted baroque folk-pop steeped in childhood nostalgia and loss of innocence. But, having stripped things down, this time round, in moving from the then to the now and a potential post-apocalyptic tomorrow (lyrically clarified in the title track when they sing "it's over now. The flag is sunk. The world has flattened out") asking whether anything we do matter or make a difference, they've built them back up, not with drums but with electronica, so that there's barely a single number without some sort of synthesiser effect or rippling electronic keys that, at least initially, tend to distract rather than enhance. It's as if they've taken a brilliantly simple concept and overthought it.

Even so, and despite the fact that, with a couple of exceptions, the songs aren't as immediately memorable as before, there is still much exquisite, shimmering beauty here, even if the vision is somewhat darker. Along with the title track, the similarly styled 'Eschaton' with its bubbling synth line and watery imagery are unquestionably the loveliest melodies, somewhat ironic given the lyrical content, the latter's title the theological concept that basically translates as the end of the world as they sing "No matter what we've been, we are the upshot now."

'Singularity', which comes with mournful trumpet, is a reference to the hypothesis that the development of artificial superintelligence will bring about unfathomable changes to human civilisation, "that a shooting star will shoot me down" and turn the world into a ghost town.

However, just as the title track refers to being given another chance in video games, there's hope glimmering in the darkness. 'Futures' with its pizzicato strings and Mrs Robinson guitar riff talks of "future forests in the sea" and "bikini snow," (a historical euphemism for nuclear fallout) and the Thermocene Epoch (the geological period brought about by global warming), but they also sing that "It's not ever too late", the note of optimism bolstered by a snatch from 'I've Just Seen A Face.'

Likewise, if 'Indian Orchard Road' with Paseltiner's urgent cello riffing talks of something waking and making its way through the timber woods like Yeats' rough beast slouching its way to Bethlehem and, on the pizzicato violin punctuated 'Orion', "the paint is peeling off of a dream. The pool is draining into the sea", on the folksy ripples and trumpet shadowed 'Hold Your Head Up High', set against the line that "nothing is forever, everything is soon" the harmonies carry a positive image of rebirth, that "underground the new life thunders up and on" with the anthemic chorus of "a time will come again."

I'm forced to confess I find it hard to make a case for the two shortest tracks, the percussive itchy 78-second 'The Rabbit and the Pointed Gun' or the even shorter stream of consciousness 'Rita Hayworth', but set against these are the a capella choral harmonies that open the dreamy if lyrically opaque 'Lindisfarne' with its strings orchestration and the reflective waltzing 'Old Friend' which very much conjures thoughts of Bookends, the S&G album with a very similarly titled song.

It ends with the urgent, driving locomotive rhythm of the ecologically-limned 'Best of the Best Of Times' as they wonder if the world's waving farewell from the window "heralding heaven and Auld Lang Syne" or "whether our days are unnumbered" and, if we take action before it's too late, we'll be "pulled from the wreck in the daybreak. All equal and safe."

As I say, it may take time to let this grow on you, but, unlike anything else out there, it again reinforces Darlingside as a unique and hugely accomplished, intelligent and articulate musical force and, if we truly are dancing towards the end of days, someone should book then for the last show on earth.