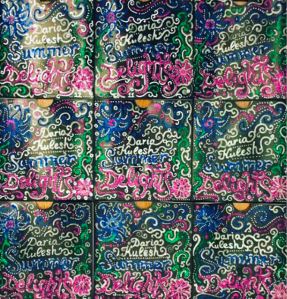 
Daria Kulesh is back again with a new seasonal EP, Summer Delights, featuring some of her regular musical companions - Marina Osman, Jonny Dyer, Tristan Seume, and Vicki Swan. Fans of Daria will know exactly what they are in for; a dreamlike meander through a landscape of fairy tales and fables. That's not to say the EP is predictable though. This is a short collection of very big songs, and while non-Russian speakers will not be able to follow the specifics, they'll be happy to go along for the ride.

We start off in English with a cover of Sandy Denny's Like An Old Fashioned Waltz, full of romance and wistfulness. Bumblebee is a wonderfully demented song with an operatic feel, and sweeps you through the air as if riding the titular insect. Rusalka will be familiar to many, having first featured on Waters So Deep, the debut album from Kara. Dunya's Ferry is another enormous song, not so much in length as in breadth, and is a really fun listen.

Summer Delights is more proof (if proof were needed) that Daria is producing some of the most interesting music of the UK folk scene, and fully deserves to be recognised as a musician on the rise. This is a delicious appetiser as we await the main course of Earthly Delights, her next full length album due for release later this year.

She Moved Through The Fayre