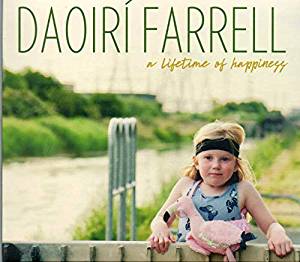 
I might describe Daoirí’s career path thus far as a gradual blossoming over a decade followed by a meteoric rise over the past couple of years. His 2009 debut album The First Turn was very much a low-key release, and known only to cognoscenti who’d observed him quietly but keenly studying traditional music at colleges; however, its 2017 successor True Born Irishman brought his talent firmly to the attention of those who’d missed his 2016 appearance on BBC Radio 2’s folk programme, and the acclaim was cemented by the winning of both Horizon Award and Best Traditional Track categories in that year’s BBC Radio 2 Folk Awards. His personal brand of authentic Irish traditional music has been widely acclaimed and he’s captivated audiences at many festivals as well as being invited to tour with the prestigious Transatlantic Sessions last year.

Now then for the “difficult third album”, which proves to be nothing like difficult! It flows so very easily; but it also captivates from the word go and keeps your attention through 49 minutes and ten tracks without ever needing to shout. This time round, Daoirí’s realised his dream and engaged Dónal Lunny no less as producer – and if ever anyone’s perfect for the job then Dónal’s the man. He really understands Daoirí, his credo and his psyche, and the two men clearly share a common musical and artistic vision. Together with a select crew of guest musicians, Dónal creates an ideal backdrop for Daoirí’s passion-fuelled delivery, a backdrop that, while intricately configured and appealing, never interferes with the songs’ message. Individual spotlights may from time to time fall on contributions from Pat Daly (fiddle), Seán Garvey (accordion), Seán Potts and Mark Redmond (uilleann pipes and whistles), Geoff Kinsella (mandolin), Tara Finn (concvertina), Avril Crotty (cello) and Robbie Walsh (bodhrán), but the sense of close-knit ensemble is also strong and accords closely with the intimate, involving nature of Daoirí’s song interpretations and his wonderfully limpid yet strongly delineated bouzouki playing. Daoirí’s singing is outstanding by any standards; stylish and absolutely riveting, he audibly draws from the deepest wellspring of the sean-nós tradition, while he’s also informed by some of the 20th century’s greatest Irish singers (Liam Weldon, Al O’Donnell, Frank Harte, Cathal McConnell), whose direct and lasting inspiration he is ever eager – and intensely proud – to acknowledge.

No room here to dissect, or even mention, each track, but they’re all glorious. I can’t resist, though, highlighting just a few of my personal favourites. For starters, there’s three contrasting love songs in the form of Rosie Reilly (by Co. Roscommon’s John Conneely), with its earthy, brooding harmonium, accordion and mandolin accompaniment; the disc’s gorgeous closing reflection Via Extasia (by Liam Weldon), and The Galway Shawl (impeccably managed, with both sensitivity and onward momentum). In contrast, we get a brilliantly animated account of the hare-hunting song The Hills Of Granemore (set to a rollicking dog-galloping bodhrán beat) and the boastful broadside Valentine O’Hara (a Tyne Of Harrow variant). ), and the curiously melancholy drinking song There’s The Day (which on the choruses features three backing vocalists including Máire Ní Chronáin. And I don’t think I’ve ever heard a more persuasive cover of Alan Bell’s magical Windmills (and you can hear every word too!).

Since Daoirí’s avowed mission is to communicate the songs, it’s only fitting that he has provided affectionately informative booklet notes detailing the songs’ origins, his own sources, and his rationale and inspiration for learning the songs, and, with the further addition of the complete lyrics, Daoirí positively invites us to “feel free to learn and sing the songs loud and proud”. And we will, to be sure. Daoirí’s parting shot is “I hope I served them well”; and of that there is absolutely no doubt. For this album is nothing less than a quintessential Irish folk album, the heartfelt, pride-and-passion expression of a collection of classic songs, and as such is unlikely to be bettered this year.