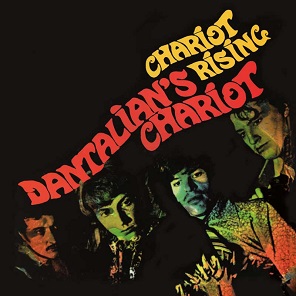 
The band Dantalian’s Chariot was in existence for barely ten months in 1967, right at the zenith of the heyday of the psychedelic revolution in rock music. The combo has a massive reputation for being among the true pioneers of that scene, and yet their album Chariot Rising remained unreleased for nearly three decades after it was recorded.

The band arose out of the ashes of Zoot Money’s Big Roll Band, one of the era’s leading soul-and-blues-based outfits, when Zoot himself became disillusioned with the ubiquity of the kind of music he was playing. With the aid of guitarist Andy Somers (who a decade later as Andy Summers would be a key member of The Police), bassist Pat Donaldson and drummer Colin Allen, he formed a new band, Dantalian’s Chariot (named after the spirit for art and education consulted by King Solomon). This band set out to become a unique creative force within the new psychedelic scene, presenting self-penned songs in groundbreaking audio-visual live performances incorporating a professional light show and deliberately dressing themselves entirely in white in order to subjugate or eliminate the cult of personality that might otherwise get in the way of the music and visuals being appreciated for their own sake. In September 1967 the band released a single, The Madman Running Through The Fields, which was notable for its interesting lyric construction (use of dual viewpoint) and thoughtful, pioneering adoption of studio-psych trappings such as reverse-taped cymbals. It was critically acclaimed, yet inexplicably failed to make an impression on the UK charts despite chiming in well nigh perfectly with the prevailing psych-ascendant late-’67 mood of successful singles by the likes of Pink Floyd and The Pretty Things (on the same label to boot).

Unflustered by this lack of success, the band entered the studios to record an album’s worth of material; they brought in a couple of extra musicians (Nick Newell and Geoff Condon) to add sax, flute, trumpet and flugelhorn parts to the already exotic band sound which on some numbers prominently featured the sitar. The result was a stimulating, if stylistically a little uneven, prospective LP, which to everyone’s surprise was turned down by EMI; thus the tapes languished in the vaults until the late-’90s. Another label (CBS-Direction) offered Zoot Money a contract, and an album (Transition) was issued in 1968 but featuring completely different material; after this, disillusioned, the band dissolved and Money and Somers joined Eric Burdon & The Animals (even recording a new version of The Madman on Eric’s late-1968 double album Love Is).

What we have here is a straight release of the Chariot Rising album tracks, with no extra material (it would’ve been good to have included the only other recorded example of Dantalian’s Chariot, a track from the curious cult movie Popdown, and the Transition album – which I’ve never even heard). Even though the 'Madman' single sides lead the set off, the ten-tracker still stands up well enough as a recorded entity very much of its time, and bears testament to both the quality of invention and the confident talents of the band members. It presents a varied sequence of cathartic moments, such as the effects-laden heavy onslaught of psych bombast 'World War Three', the cool two-part sitar-and-flute instrumental 'Soma', the somewhat Penny-Lane-inflected 'Fourpenny Bus Ride' and the direct setting of a newspaper report 'Four Firemen'. 'The Coffee Song' is a credible cover of the number recorded by Cream the previous year, rather reminiscent of the mystic side of Traffic or the Moody Blues, but 'High Flying Bird' felt just a touch cliché lyrically within its freewheeling west-coast jazzy setting. 'This Island' is a dreamy sitar-led instrumental, a bit Tornados in feel perhaps, whose appeal is in danger of being washed away by the constant ocean-wave sounds.

Maybe in the end it’s not a wholly consistent artistic vision, but there are many far less unified (and more widely acclaimed) psych-band albums from the era. Praise to Esoteric for making this excellent edition available, and for the fine presentation including informative booklet essay.