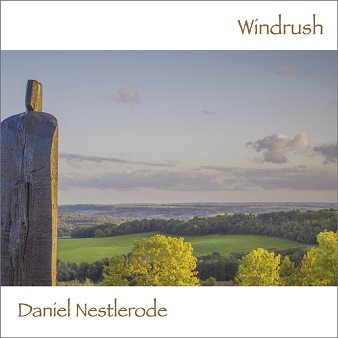 
Daniel Nestlerode's latest release is very much an example of "Americana over here." His Pennsylvanian roots - both rocky and traditional - are clearly apparent, but there are subtle overlays of a European sensibility that contribute to the formation of a sound that is rather uniquely his own.

Although he's not afraid to write of social issues and the full gamut of love, family, history, and contemporary society (including both Brexit and the trials endured by the Windrush generation of the title), Daniel's angle on these matters is to evoke sympathy rather than anger, love rather than angst: it's an album you can relax to without surrendering identification with the subject matter.

He's been resident, and domestically settled in France for the last two years, and obviously keeps his musical ears open. The overall sound here, despite its North American roots, is not out of place with the auteur-compositeur tradition so prevalent on the Continent.

I can hear touches of Moustaki in the blending of the personal and the universal, particularly in tracks like After All (about the need to close the door on the failures of the past, while acknowledging the scars they have left)), and Living the Dream (about his experience of being an American, married to a Frenchwoman, living in England as the shadow of Brexit descended).

There is also a very Italianate, Morricone-like, feel in the implied narrative of the title track - a dramatic instrumental that seems to speak of frontiers and challenges.

Love of family pervades this album - songs like Unexpectedly, Tout Ce Qui Fait Toi ("All That You Are"), and Being a Boy share with the listener the joy he has found in his marriage and the birth of his son - it also doesn't hurt that they are very fine songs.

The choice of covers also seems very personal. American Civil War song The Vacant Chair laments the death of young men in war, The Parting Glass seems to reflect his own travels and the farewells he has made, and his take on Victoria Vox's C'est Noyé ( probably best rendered as "My Cares Have Drowned") is a reflection of the way in which those travels have helped him shake off past troubles.

Finally, we're not allowed to forget that Daniel is a fine instrumental composer and player. He sandwiches the album tracks with his own White Flower Waltz - a minimalist version to start with which reprises at the album's end in greater length and complexity, eventually settling, from a smooth crescendo, back into the bare-bones version with which he started. The traditional American breakdown Blackberry Blossom also shows of his musical flexibility as it drifts effortlessly through the keys.

This is an album that's very easy on the ear, but that ease of listening goes hand in hand with its creator's fine gift for forging melody and artfully-crafted songs.