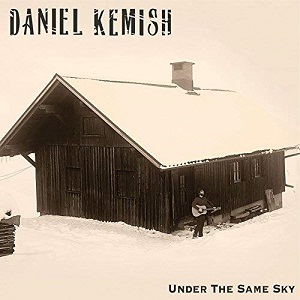 
A sturdy blast of well-constructed county rock by a by a British singer-songwriter based in Portugal, written in Austria and recorded in Lisbon, with a top-notch band of Iberian musicians. This is the second album by Daniel Kemish, following 'Fools and Money' in 2016, and he moves away from the distinctly country feel of that debut into the equally well trodden areas of blues-rock and Americana.

Kemish has immersed himself in the legends and themes prevalent in the country rock of the southern and western states of the USA, and has produced a carefully crafted album, channelling everything from Gram Parsons to Steve Earl, from the Eagles to Little Feat. Timeless, it could have been recorded at any point in the last forty years.

Things kicks off with a lively steel guitar riff, leading us into the mid paced rocker 'They Say I'm Crazy', the excellent backing band is subtle and effective, with real swing. Blues tinged vocals deliver a homecoming ballad, the wanderer returns after a life on the road. A lonely man in a hotel sings of his lost love and the temptations of the devil in 'Fool for You', with it's lilting chorus.

In 'Hold on Tight', a loner refuses to be tied down. The acoustic guitar led 'Empty House' is a song of loss and regret, building into a power ballad, as our hero looks for a place to hang his hat. And it was at about that point, that the relentless clichés in the writing started to chafe, like the leather straps of a badly fitted set of chaps.

In many ways this is a superb album, but wanders too close to pastiche to be comfortable on close listening. And one that, lyrically, stereotypes the male as a maverick cowboy, a taciturn man-boy baffled by the women in his life, more at home with his truck and a bottle of moonshine. That is of course the dominant style of the genre, and is undeniably popular, and he has a gig list to die for, touring Europe solidly, and spending a month in Germany alone.

But the album lacks humour or real passion, sounding like a really, really good covers band or the soundtrack to a TV series. The bluegrass tinged 'In this Town' has a lone traveller wandering into a bar. 'Cards Marked in Advance' starts with power chords, and a gambler with nothing to lose, realises that his woman has been dragging him down. On the gentle acoustic 'Just another Day', a man wakes up alone, bemoaning his life working on the line. 'I've Been Down this Road Before' he sings later, with no apparent irony.

The album closes with the muscular 'Travelling Man', driven by a monster ZZ Top guitar riff and a lyric straight out of the 1970s blues rock.