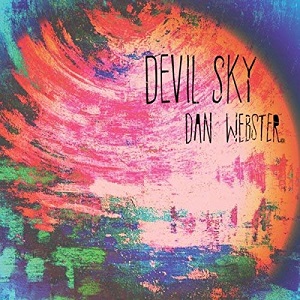 
Jaunty from the off, if a little over cheerful, its opener is a signal to the cornucopia of sounds across the record to come from one of the UK's best kept secrets; Dan Webster. Slowly ticking away in the background, filling backwater arts centres and low-key festival stages around the UK, Webster's workman like approach to his career is to be admired. He comes to town, plays, wins the hearts of those that know a good thing and moves on, he knows that hard work, hours on the road and good craft bring a solid career; this record feels like one of those building blocks.

Already 4 albums in Webster is still pedalling his folk infused acoustic rock, falling between the cracks of any specific musical genre he recorded this at his active studio in York. It's a wonderful product, rich in tone, subtle in its craft, uncompromising in its quality; reaffirming his credentials as a go to producer. Recent stints playing gigs with Lachlan Bryan and Meeghan Blanchard has clearly given him a new colour to his palate, this is his most transatlantic sounding record yet. Verging on Americana (it's not, but a very UK take on the genre -Anglicana if you will), his stint as the sideman to East Nashville stalwart, Amelia White has clearly really rubbed off; fiddles abound along with occasional bluegrass flourishes.

The album was launched with a mildly amusing video - and that's the crux of the record, Webster has thrown everything at it, yet it's still a bit mild. On his excellent previous record, Tin Man, Webster showed what he could be - tracks like 'Gin' and 'Elvis' found him at full tilt epervesing with a desire to be heard. His earthy, grittier, rootsier sound is missing this time out, dropping his blue collar rock n' roll, he's reverted to his more familiar folk core. He's given equality to his fellow players and band mates too, gifting them solo's and shared vocals - clearly showing he's a top producer and wants to show off his substantial technical prowess.

The song writing is quality, the playing standard very high and a better technically produced record you'll struggle to hear, it is certainly this listeners folk record of the year. 'Nothing at all' is the album highlight, very Tom McRea, Webster at his darkest, most Spartan is him at his best, you can image it live, solo, acoustic, with Brown's cello setting the hairs on your neck to attention, the theatre weak at its knees. The Natalie Imbruglia sounding intro to 'Joe', once got over is another gem; and gives regular side woman Brown a chance to flourish, she brings a weight, a heft to what Webster does, punters will always adored the gravitas her cello brings.

If this is Webster's folk record, I'm sure I won't be alone in hoping album number 6 is going to be his Dylan at the Albert Hall moment - Dan goes Electric if you will; where he goes next is pivotal if his career is to jump forward once more.