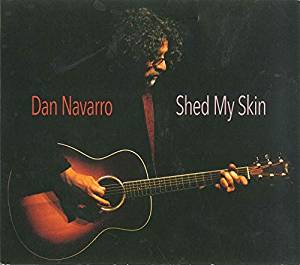 
American artist Dan Navarro is something of a multi talented fellow with a successful career spanning over 30 years to date. Starting as a songwriter for others with many prestigious tracks to his name, he then worked mainly as a duo with Eric Lowen before transitioning smoothly to a largely solo career over the past ten to fifteen years. Dan also has a parallel life as a voice actor and singer in numerous films, series and adverts but somehow still finds time to tour consistently and release albums under his own name.

Current album 'Shed My Skin' features twelve songs, seven of which are Dan originals, one co write and four covers, all of which were recorded, produced and mixed by Steve Postell. The record also has a grand total of twenty two performers on it contributing numerous instrumental parts and vocals, unfortunately far too many to mention by name here.

Opening and title track 'Shed My Skin' saunters in on a gentle acoustic strum quietly supported by bass, reverbed guitar and harmonica as something of a prequel to Dan's voice, and what a voice it is. Rich and buttery with a pleasing husk, for me it conjures up aural resonances of Richie Havens, Ray LaMontagne, Ted Hawkins and Archie Roach, great singers all. The song gradually builds, layers and pushes itself through, allowing time and space for everyone to display their musical wares, a great start.

'Night Full Of Rain' written back in 1997 by Kenny Edwards, Steve Byron and Dave Byron is given something of a menacing, stark treatment with its slow, percussive thump before entering more ballad territory with the chorus and refrain, whilst the finger picked lines and piano melody of 'Bulletproof Heart' showcases perfectly the clever lyrical phrasing of lines like "Now I try to remember, to try to forget, the way you felt that night but it ain't happening yet, one perfect kiss blew the shackles apart, keep you locked inside your bulletproof heart".

'Straight To The Heart Of Me' is lovely Americana balladry, 'Arrows' more nimble acoustic picking and sweet harmonies and 'Let Her Ride' all atmospheric reverb drenched guitar and banjo with a delightfully rhythmic, retro sense of English folk rock.

The lofty standards set out in these opening songs are maintained with ease throughout the rest of the album and other personal favourites for me are the restrained rockabilly of Billy Idol's 'Sweet Sixteen' the John Hiatt type sensibilities of 'Hard For Me Now' and the respectful but still imaginative reworking of Jimmy Webb's 'Wichita Lineman'.

Everything about Dan Navarro's ' Shed My Skin' is quietly pristine, from the quality of the songs, the musical contributions, beautifully organic production qualities, the endlessly creative arrangements and of course, that voice! A very fine album indeed.