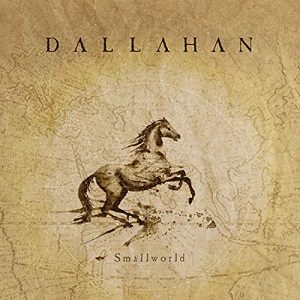 
Since releasing their debut album in 2014, Dallahan have established themselves as one of the most exciting live bands around with a hectic touring schedule that has included Kathmandu! Having formed a new partnership with Westpark Records, they have now released their third album, Smallworld. There is nothing small about Dallahan's musical vision which draws influence from a wide variety of styles and genres to create a unique and coherent sound.

Opening track, Aye Chiki Chiki has an Eastern European flavour to the melody, underpinned by a strong rhythmic pulse. The ensemble between the instruments is absolutely rock solid, with a tasteful improvised central section where each solo beautifully compliments the next. Terrarium offers a change of pace with a set of reels. Initially banjo and fiddle led, the accordion becomes more prominent as they transition into the second tune, increasing the fullness of the sound and adding to the musical intensity before taking the lead in the final tune, penned by accordionist Andrew Waite. Sagan's opens with a lilting jig on fiddle and guitar before shifting up a gear for another continental inspired tune before another complete change of tempo for Jack Badcock's stunning tune Sagan's. The final instrumental track is another original composition from Andrew Waite which has some fantastic interplay between the musicians, layering musical ideas over each other to create a really engaging arrangement.

While some of the songs on Smallworld are traditional lyrics, Jack Badcock has given them a contemporary twist with new tunes and, in the case of Jailsong, some additional lyrics. His new chorus turns the song into a commentary on racial prejudice, seamlessly blending with the older verses to create a compelling song which features a cracking instrumental break from Andre Waite. Mother is a melancholy offering telling of hunger and deprivation. The delivery is captivating, with the gentle accompaniment supporting the vocals without overpowering them. For a complete contrast, Dilmano is a Hungarian poem by László Nagy which is full of excitement and drive, completely contrasted by a gentle instrumental section. The standout song is the Footsteps, a story of lovers that have grown apart. The lyrics are excellent and the arrangement perfectly compliments them.

This album is a wonderful blend of multicultural music making, exceptional technical dexterity and imaginative reworking of traditional material, alongside exciting originals. Well thought out and beautifully paced, Smallworld will appeal to fans old and new. If you want to catch Dallahan live in the UK, they are performing up at the Ardnahoe Distillery on May 28th, as well as Priddy Folk Festival in July.