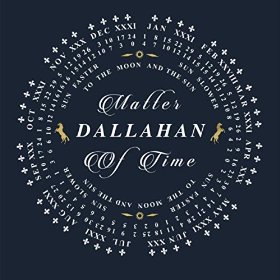 
The highly anticipated second album from Dallahan, follows closely on the heels of their nomination for Folk Band Of The Year at 2015's Scots Trad Music Awards, and consolidates both the band's distinctive sound and its captivating blend of musics and styles. One of the things I especially like about Dallahan is their mastery of light and shade and timbre, all the while satisfying with a quietly-spoken virtuosity that doesn't ever need to shout to make an impact. For example, the album's third track, Harbour Of Polperro, is one of those sets of slightly tricky tunes sure enough, but the onward progress through tempos and textures is masterful - at once carefully managed and spontaneous in feel (not an easy feat to pull off) and sporting a delicious mandolin-guitar duet midway through. Similarly, contrasts in playing technique are well explored on the Ferny Hill reel-set. Dallahan also happens to be one of those bands who convince equally with songs and instrumental pieces, not only because they can boast an excellent singer (guitarist Jack Badcock) among their ranks. The selection of songs takes in Logan Braes and Blow The Candle Out (both done to new tunes by Jack, the latter song also benefitting from a fine guest duet vocal by Ciaia McCafferty) and originals by Mike Kearney and Darrell Scott, along with a setting by Phillip King of the traditional Stretched On Your Grave. Only the Darrell Scott feels a touch throwaway, and it probably works best on stage as a join-in-refrain crowd-pleaser and a springboard for a minor instrumental workout.

Notwithstanding the band's mixed heritage, the principal focus of Dallahan's repertoire is Irish traditional music, at least on the instrumental selections, and they play this as to the manner born, even while sometimes taking chances with tempos. They set a breakneck pace for the medley of Spolkas, not least as a convenient device for ushering in a Hungarian dance for its finale; indeed, the creative juxtaposition of Irish and Eastern European musics is another special hallmark of Dallahan's freshness of approach and attitude. The musicians' open-mindedness, both in terms of the playing and arranging, makes for a genuinely edge-of-the-seat excitement that sometimes teeters (though to a positive effect) on sheer unpredictability, a quality that for the listener then proves stimulating on each replay. The only track where I felt a touch of contrivance creeping in was the pairing of a jig (Gan Ainm) with a Hungarian csángó Zöld Erdöben, where there's a pronounced jolt for the listener, notwithstanding the authenticity of execution of each section. The three-part set Pierre's (track 8) fares better in this respect, from its Romanian opening tune through to the sparky Vladimir Cosma opus that forms its final section.

The band lineup's completed by Ciáran Ryan on tenor banjo/mandolin/fiddle, Jani Lang on fiddle and vocals and Andrew Waite on piano accordion (the latter having replaced Tomás Ó Briain since the band's first CD), and yet the four-piece complement often sounds heftier despite its clean, transparent textures - and that's not just due to the occasional importing of guest musicians (Paddy Callaghan, Toby Shippey, Jarlath Henderson and Jenny Hill), whose contributions are brilliantly integrated; the album is a band self-production, and their expertise in this regard can't be underestimated. Matter Of Time was built to last.