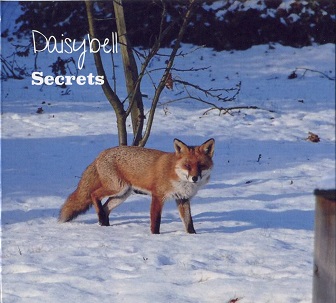 
Ginny White, Katherine Fear and Anya Fay have been together for just over a year as this incarnation of Daisybell. Katherine Fear is the main songwriter, but Ginny and Anya contribute too. The arrangements for their three voices are both harmonious sometimes intricate. All three play a variety of instruments ranging through Guitar, Ukulele, Melodica, Flute and Recorders of various pitches to Cajon. The whole combines into very beautiful harmonies and sometimes very funny lyrics.

The CD has seven tracks of which five were written by the group members. The first is "Foxes" written by Katherine after a frustrating evening trying to write a song for a project, so she went for a walk in the night. She heard and spied a fox, hence the first line, "There's Foxes in the copse along the street from where I live" it goes on "I'm no threat to them I'm not their hunter" this song although remaining gentle moves us from a picture of a natural idyll. to a situation which has parallel in the current political landscape, when we hear, "There's strangers in this strange world living down the street from me, they may soon be hounded out by misplaced jealousy" The thought provoking morale of the tale is that if we don't all pull together then none of us will make it.

Songs of the hardships suffered by the boatmen and their families on the canals when ice prevented them travelling are not exactly thin on the ground. However, a song about the adversities endured by those who muster the products that the canal boats carried in such circumstances is a rarer concept. "Miners Winter" explores the situation when coal could not be delivered, therefore the miner's wages dried up. The family have no food and the children no chance of any presents. This song was prompted by the stories told by Katherine's Great Grandfather, and compares that existence with the softer life we enjoy today. There is a hook in this song which is quite effective and fully explored using three part harmonies and features Anya's Melodica.

When Katherine announced that they felt obliged to include at least one traditional song on the CD, I wondered why. They have a complete repertoire of quality songs that are self-penned that would have more than adequately filled that spot. That said it's inclusion does demonstrate their folk roots and their ability to handle a song known to millions, thus "Silver Dagger" tells the story of a bride in waiting whose match is not approved by her mother. It goes on to expound the theory that no men are to be trusted - except her father of course. So the girl is resigned to maidenhood.

On a brighter note the girls tell us that they know the secret of a good life. At a rollicking pace we are advised that the secret is to live life as it comes. Get the sunshine on your face and a hand upon the drums. Explore the things we see around us, open every book and search the boxes before us. Get our hands out of our pockets and get on with life. The combination of Katherine's concert ukulele and the bass version played by Ginny, keeps this cheerful song rolling along and uplifting the audience.

"Willow" written by Anya is an song to a willow tree under which the singer remembers the activities that have taken place under it's branches throughout her life. It is a loving tribute to an animate object that has been part of her life for ever. Until that is, the tree was cut down. The tree served as cover and protection and holds many memories. The line "The willow weeps the night I die, kissing the ground on which I lie" assumes a mutual affection between the person and the tree. It is a lovely, emotional song in which Anya plays the recorder and sings the lead part.

The history, the dark forbidding cliffs and the iron grey sea surrounding Whitby feature in a very traditional sounding song, which, had it not been credited to Katherine Fear, could convincingly be portrayed as one which is very much older. "The Cliffs Above Whitby" tells a sorrowful tale. It recalls a woman counting the steps up the hill and contemplating how long it would take to fall all the way back down again. It does however offer hope that she will dance through the clouds into the sunshine and once again go running along the beach barefoot. It is a haunting and alluring song.

An unlisted bonus track on the CD is an acapella rendition of "Early One Morning" Beautiful harmonies and lovely clear voices abound on this lovely CD and I am sure that our house and many others will resound to frequent playing of the tracks upon it.