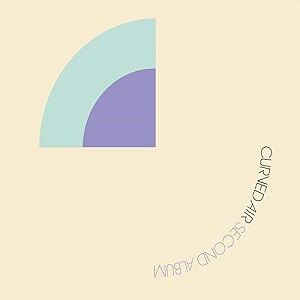 
At last, the missing link – Curved Air’s majestic second album, given a splendid new re-release in excellent remastered sound with a host of bonus material including a whole DVD’s worth of TV and concert footage. It completes the series (Air Conditioning, Phantasmagoria and Air Cut having already appeared and been reviewed here).

This widely acclaimed album was in effect a consolidation of their status as innovative pioneers which has been established with Air Conditioning, combining showmanship with genuine creativity. It featured the classic Curved Air lineup (Sonja Kristina, Darryl Way, Francis Monkman and Florian Pilkington-Miksa) with new member Ian Eyre having replaced Rob Martin on bass. It appeared in 1971, and contained the group’s only “hit single”, Back Street Luv. Sonia was also more enjoying more of a distinctive presence on this album, and had even rewritten Young Mother, a song by the band Sisyphus that had pre-dated Curved Air. Otherwise, compositional credits were evenly divided between Darryl and Francis, more or less relating to each side of the LP, and yet (perhaps surprisingly) this resulted in no loss of unity of the album as a whole. The album’s epic pièce-de-resistance was the twelve-minute Piece Of Mind, which took classical, progressive and rock into brave new territory. The aura of pushing the envelope without pretension pervaded the whole album, and it had no embarrassing excesses or dull moments; it stands up very well today.

For this reissue, the original LP is valuably topped up with five tracks recorded for BBC Radio 1. The very psychedelic Young Mother In Style is a première (January 1971) outing for the song, which judging by the DJ intro isn’t from John Peel’s Top Gear as stated in the booklet (hmm…). The remaining tracks (all previously unreleased) comprise a dynamic 1971 In Concert show. The second disc is a DVD containing three tracks from a WB promotional film, three tracks plus an interview for a French TV show and six from sessions for Radio Bremen’s Beat Club.

For those listeners not quite convinced by Curved Air on the evidence of Air Conditioning alone, Second Album presents a more rounded portrait of the band’s special qualities, and in that respect alone is to be recommended. But for existing fans of the band, this latest edition is of course even more essential. It comes with generous booklet essay, plenty of photos and insightful interview commentaries.