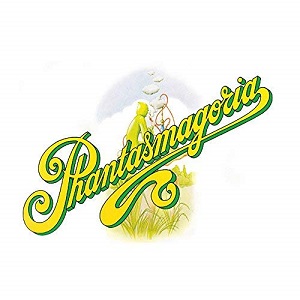 
When back in February this year I reviewed the splendid new remastered editions of albums one and four by early prog-rockers Curved Air, I expressed the hope that definitive new remastered editions of albums two and three (Curved Air and Phantasmagoria) would follow. And lo, here we are, with album number three, the magnificent Phantasmagoria, which here comes as a two-disc set. The first disc is the now-customary expanded remastered complete original album topped up with bonus tracks, the second disc is a seven-track DVD containing the band's two 1972 appearances on European TV shows (Belgium's Pop Shop and Austria's Spotlight) during the six months after the album's release (and just prior to the wholesale departure of three of the band members, founders Darryl Way and Francis Monkman and drummer Florian Pilkington-Miksa).

Phantasmagoria was certainly something of a creative highpoint for Curved Air, containing some of the band's most innovative and experimental music. In terms of the writing, keyboardist/guitarist Francis was in the ascendancy here, contributing some striking ideas to the mix and steering and determining the band's musical direction. In particular he was developing his proficiency with the VCS3 synthesiser (which had already featured, albeit more tentatively, on the band's first two albums) and other then-cutting-edge electronic technology. Notably, the album track Whose Shoulder Are You Looking Over? involved a pioneering use of the vocoder approach, whereby Sonia's voice was treated electronically. Two of the album's key songs, Marie Antoinette and Melinda (More Or Less), stemmed from lyrics Sonia had written earlier, while others like the title track and the somewhat wild and wacky finale Once A Ghost, Always A Ghost took their cues from fantasy and the supernatural. The latter was one of several tracks on which the band members were augmented by outside musician friends (xylophone, vibes, flute, trumpets and trombones and assorted percussion) - altogether an interesting sound. As a throwback to earlier glories, there was also an inevitable Darryl Way violin showcase - Cheetah - which was followed by the album's small filler quotient - the slightly pointless synth-generated miniature Ultra-Vivaldi - but overall Phantasmagoria proved an intriguing and musically consistent set.

The bonus tracks comprise the reasonably essential A-side of non-album single Sarah's Garden and a pair of curiosities in the shape of previously unreleased alternate-takes of album tracks Marie Antoinette and Melinda (More Or Less) with foreign language versions of the lyrics. The accompanying booklet essay is further enhanced by some exclusive interviews. A valuable reissue.