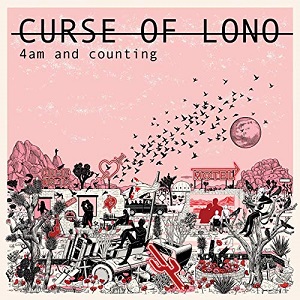 
I don't know what it is. I'm haunted by the fact that when I first heard the name Curse Of Lono, expectation was of some sort of lumbering doom metal; something dark at the very least. As they say, imagine my surprise… That thought is still there, although now it's only a fletting one having become used to their now familiar alternative Americana /country sound that may owe a nod or two to some of the ground breakers and trend setters of the Doors and the Velvets along with more contemporary influences.

If you've not already experienced '4am And Counting' through the wonders of the Record Store Day red vinyl edition, you can now join Curse Of Lono live and stripped back at Toe Rag Studios. The band are supplemented by guest appearances from pedal steel legend BJ Cole and harmonica player Nick Reynolds (son of the great train robbery mastermind Bruce Reynolds - one for trivia buffs) as they cover eleven tracks from 'Severed' and the 'As I Fell' EP. It finds them in organic mode; get your mates down, gather round, probably in a circle, press record and away you go. They've taken the understandably sensible step of setting up to record themselves playing as they would in a live set up. A no brainer really and maybe more surprising that more bands of any ilk don't adopt a similar approach.

Cool and relaxed is the order of the day - the sound that eases aching heads; occasional bluesy licks and harp injections, easy grooves , rolling and rumbling rhythms all make appearances in accompanying some standard Curse Of Lono harmonies. 'Way To Mars' might have them crossing swords with a Knopfleresque direction, both vocally and musically, as the pace gains a few notches briefly and you may guess that there could have even been some hip swinging in the studio. Yes, there is a dark late night feel and considering the Felix Bechtolsheimer's aim that, "we wanted to capture the vibe we get when we're jamming late at night" to be fair, it's a case of mission accomplished.

Tell Me About Your Love