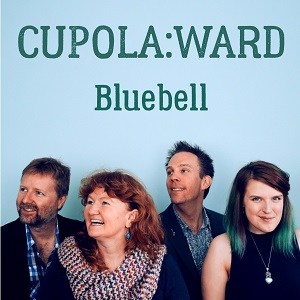 
One of the hardest things to determine when writing about Cupola:Ward is to decide what they are. They call themselves a collaboration, so that's hard to argue against, but the overwhelming feeling is that they are far more. They're a fresh creation and there's a synergy at work here, producing music that would not have come from the individual elements.

Cupola (Doug Eunson, Sarah Matthews and Oli Matthews) describe themselves as playing English and European dance music and English songs. They can call on a range of instruments including melodeon, hurdy gurdy, saxophones and fiddle as well as their voices. Lucy Ward is a singer-songwriter who plays various guitar and concertina but considers her voice to be her primary strength, and has won or been nominated for numerous awards since reaching the final of the BBC Young Folk Award in 2009.

As a collaboration they're been together since 2012 impressing at folk clubs and festivals, as their individual schedules allow, but the only recorded material had been the EP "Four" released in 2013. That has now changed with the release of this full album, officially launched to a full house at the Guildhall Theatre in Derby recently.

The choice of venue was not random as all four performers hail from Derbyshire and the local area provides the inspiration for several songs including "Damped in his Groove". This is a song written by Geoff Convery, about lead mining in Derbyshire. The title refers to a cause of death often found in church records. It literally means "died in his claim". As with all mining it was dangerous work, but profitable if you survived, and the song is sung from the point of view of a young woman exhorting young men not to forsake their sheep and cattle in a for leaden riches and potential death.

The album opens not too far away from Derby with the rollicking Julie Matthews "Crane Driver", the story of women taking on men's jobs in the second world war; in this case driving cranes in steel mills. Eighteen year old girls could earn £9 a week, probably more money than they had ever seen in their lives, but despite the excitement they already knew it was only until the boys came home.

Several of the songs on the album explore women taking control of a situation, as may be expected from modern folk performers, but it isn't all glory and breaking glass ceilings.

"Heather Down the Moor" is a charming, but sad, traditional song of a woman who passes up the chance of love because her life is tending to the sheep up in the hills. This particular song is also notable for the beautiful four-part harmony Cupola:Ward do exceptionally well and is one of several included on the album. "Jacob's Well" is a 19th Century Methodist hymn and the version chosen has specific links to Derbyshire. That attention to detail is evident throughout the album.

So far, so good and the album appears to be another worthy addition to any modern folk collection, where the tradition is acknowledged and guides the songs, without corralling them into conformity. However, these musicians are far too good, individually and collectively, to leave it at that. Their real strength is that they have sparked off of each other and explored areas they would never have gone to otherwise. When you realise that Lennon & McCartney's "Nowhere Man" fits perfectly in to an 18th-century cotillion, and have confidence in your ability, you create a sound that is both familiar and new.

Not on the album, but played at the launch evening, was another modern folk classic "Hit Me Baby One More Time" and why shouldn't it be considered a folk song and, more specifically, a broken token?

That you will be here and give me a sign"

This is an exciting album. There's enough to keep the traditionalist happy but will also appeal to those who consider folk music to still be about chunky sweaters and finger in ear. The style is lively and each of the four contribute fully to the proceedings. It's an album that deserves to be heard from a group who will hopefully go from strength to strength.

I can't leave the album without mentioning two things. The first is the last track "Normandy Orchards" written by Keith Marsden. It tells the story of a small village, somewhere in the bucolic south, that became a staging post for troops preparing for D-Day. The sudden influx of tanks, wire barbed and "young men come learning to die"stands in stark contrast to village greens and cornfields. It's an incredibly moving song, combining Cupola's fine musicianship with Lucy Ward's voice at it's most delicate and beautiful.

Finally the album is released by Betty Beetroot, an independent record label and production company which aims to give artists control over their music. May it go from strength to strength.