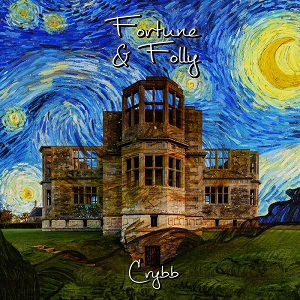 
Northamptonshire is home to both Kate Lucas and Gary Painting, the duo who make fine music under the Crybb moniker. Whilst Kate was born in the county, in Finedon, Gary is a relative newcomer, only having lived there for the past decade, previously having lived in the South East.

Whilst it may rather a stretch to label this release as a 'concept album', there is certainly no doubt that the common thread running through it is a celebration of Northants, in a collection of songs, honouring and extolling the virtues of some of its people, places, trades and history. Indeed, there is a warm invitation to the listener 'to come with us into the greenfields of Northamptonshire and share with you love songs about the places that are now firmly ensconced in our hearts'.

With Kate credited with whistles, melodica, vocals, and Gary, guitars, bouzouki, stomp box and vocals, the album is very much acoustic in flavour. With all songs being Lucas/Panting compositions, apart from one, together with the lyrics to another, this is a departure from their previous, well-received debut, Aubade, where the majority were covers. (Reviewed in FATEA here). Recorded live, Fortune & Folly is an apposite title indeed, for reasons that will hopefully become apparent, and is a mini-album that delivers fully in terms of both musicality, interest and enjoyment.

Opening song, Downtrodden recounts the double demise of the world famous Northampton shoe industry, initially during the 19th Century, as the workers within what was a cottage industry fell foul of the introduction of the first machinery in 1857, and the inexorable rise of factories, and much more recently as the self-same factories moved production to the Far East, leaving only a handful of high-end manufacturers. This is a fine example of a contemporary song which, with a little imagination, one couldd imagine as being issued on a broadsheet in days of yore.

In 1254, as a 12 year old, Leanor left Castile to become Alienor, in the English of the time, the devoted wife of Edward I. Following her death, near Lincoln, the grieving king ordered a stone cross to be erected at each of the stopping places on her body's journey to London, finishing at Charing Cross. Of the 12 erected, only three survive, two of them being in Northamptonshire. An intriguing story, which is served full justice with Eleanor, as Gary's lyrics, written from the viewpoint of the King, perfectly complement his guitar work, which initially evokes the geographical area formerly known as the Kingdom of Castile.

The great labouring-class poet, and son of Northants, John Clare provides the lyrics for the next song, as his I Am poem is set to a beautiful melody, and is wonderfully delivered by Kate. Spending a great deal of time in the Asylum of St. Andrew in Northampton, suffering from mental health issues, the title is Clare's response to the question "How are you?" and his words painfully, but perfectly, convey his feelings of isolation and disillusionment.

"I am: yet what I am none cares or knows,
My friends forsake me like a memory lost;
I am the self-consumer of my woes,"

There can't be too many Northants sea-shanties around, but the tale of William Digby Dolben might just, at a stretch, qualify. The eponymous subject of the song, a Lieutenant Commander and member of the gentrified family owing Finedon Hall, was drowned off the west coast of Africa, aged 24, in 1863. Subsequently, his father built The Volta Tower folly, in 1865, to commemorate the death of his eldest son, (curiously, his younger son, a poet, also drowned, aged 19). Kate's melodica certainly gives the song a nautical undercurrent. Fortune & Folly personified indeed in this song.

At first glance, the next track, Lighthouse, might also signify a maritime connection. In fact, it refers to the famous local Northampton landmark, the old Express Lift Tower, (now National Lift Tower), once the only lift-testing tower in Britain, and now a Grade II listed building. The sole instrumental track on the CD, Kate's beguiling whistle-playing weaves effortlessly around Gary's bouzouki in delightful unison as the duo deliver their homage to a local landmark "as it passes from function into folly."

The narrative of Meadow recounts the last Abbess of Delapre, Clementina, who, for a long time, held off Henry VIII who wished to take control of the Abbey as part of his English Reformation, and Delapre's survival as a common green space. Delivered as a lament, this song conjures up scenes of the English pastoral spirituality that surely existed at the time these Clunic nuns prevailed.

The only cover presented is a fine rendtion of Stuart Marson's epic tale, To Close To The Wind, written from the viewpoint of a member of the notorious Culworth Gang of highwayman to his wife the night before he is due to be hanged, and made famous by Fairport Convention.

"For twenty years, we have roved the highways of Northamptonshire.
From Daventry down to the southern byways"
The final offering, Lyveden, is a song whereby Lyveden New Beild, an unfinished Elizabethan summer house, (possibly a 'secret house'), can be construed as metaphor for the best laid of plans coming to nothing, but at its heart a song of love, or could that be folly?

Previously, I have noted similarities with the music of Dr Strangely Strange, whilst other touch-stones of note present here include elements of Amazing Blondel and Gryphon, with comparisons to Ray 'Chopper' Cooper in terms of the narrative song-writing also being easily made.

A mention should also be made of the stunning artwork, courtesy of Nathan Lucas, which further enhances this absorbing package.

Fortune & Folly is a very fine collection of songs indeed, and should interest, engross and entertain music lovers living outside Northants as much as those within.

Too Close To You