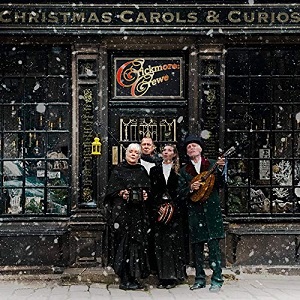 
A good few months have elapsed since I reviewed the first of this year's seasonal offerings (right in the midst of the heatwave, which now seems but a dim and distant memory!), and here's the second to come my way (and beating Kate Rusby to the post in more ways than one!).

This is without question a Christmas record for those listeners who are desirous of celebrating the season in a traditional spirit of good cheer yet who remain solidly (and sensibly) resistant to the "same old, same old" repertoire served up in bland or jaded arrangements. I'm thinking it will also appeal to those who enjoy Maddy Prior and The Carnival Band's well-established seasonal delvings; Christmas Carols And Curios may be conceived on an altogether more modest scale, but a vibrant spirit of research and execution is common to both groups. Crickmore: Crewe is a four-piece ensemble which is convened specially for performances of a seasonal programme that tours the Yorkshire region's folk clubs during the relevant months. It comprises two couples - Emma & David Crickmore, and Virginia & Peter Crewe respectively, all of whom are excellent singers who sound well together in any combination, and who between them also offer considerable proficiency on an assortment of instruments, principally concertina, harmonium, mandolin, mandola, whistle, guitar and percussion (with added double bass, harpsichord and even a chamber pipe organ at one point). There's a warm, convivial ambience to the proceedings, and David Crickmore's own expert "Durberville brand" production does the quartet proud indeed. Performances are refreshingly understated, while nowhere lacking in commitment or life-affirming energy.

All of the above attributes might still count for less if the disc's contents weren't so enterprising and appetising - but its 14 tracks (thirteen songs/carols plus a street collecting-cry) contain several choice offerings that are likely to be unfamiliar to even the most "seasoned" (pun fully intended!) of Yuletide song aficionados. One of the most interesting discoveries is David Crickmore's own composition First Foot, a New Year item which, though written in his schoolboy days, proves something of a find and well worth exhumation, indeed deserving to be taken up into the wider seasonal repertoire. Other memorable moments come with the rarely-heard Levy Dew (Lol Lynch's setting of an anonymous poem) and the Irish Gaelic carol Night In Bethlehem, and an almost folk-rock take on the combination-tale King Pharim. And even where the source material is familiar, the Crickmore: Crewe treatments aren't - for instance, "different" melodies than usual are brought into play for Down In The Forest and Burning Babe, to good effect. There's a nicely unhurried take on Shepherds' Song, while Christmas Song is the Thomas Brereton text familiar from the singing of the Copper Family (although I might almost have expected this to turn out to be the Ian Anderson/Jethro Tull number instead!).

Christmas Carols & Curios is a very welcome release, one that genuinely delights in bringing us the joys of the season while sparkling with invention and insights and remaining duly respectful of the traditions whence the songs originate.