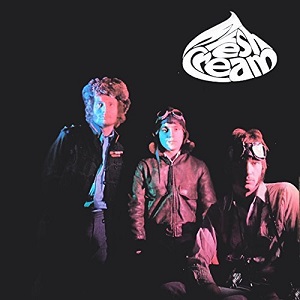 
Formed in 1966, the powerhouse trio Cream was arguably the first of the 60s supergroups; it comprised three of the most brilliant musicians from that year’s blues/pop/R&B scene – guitarist Eric Clapton (from John Mayall’s Blues Breakers), drummer Ginger Baker (from The Graham Bond Organisation) and bassist Jack Bruce (who’d then just left Manfred Mann). The combination of talents was vibrant, volcanic, and immensely volatile, and the music they produced together was, on record at least, an ostensibly puzzling mix of dynamic blues covers, cataclysmic instrumental workouts and original songs that were by comparison perhaps slightly low-key in their impact. A notable example of the latter was the strange, somewhat whimsical Wrapping Paper, which was deliberately (but IMHO misguidedly) chosen for the A-side of the group’s first single (its B-side Cat’s Squirrel would with hindsight have been more representative). It was in the live setting, though, that (shorn of the self-consciously studio-based whimsy of some of the vocal numbers) Cream was to gain its massive following and set a blueprint for many bands to follow.

This all-inclusive three-disc set brings to CD for the first time both mono and stereo mixes of the group’s debut album Fresh Cream, which presented a good cross-section of the repertoire including storming studio tryouts of material that as essential and iconic live vehicles would in some cases last right to the end of the group’s career – viz. the mighty guitar edifice built around Willie Dixon’s blues classic Spoonful and the instrumental tour-de-force Toad that at this stage lasted a mere (concise!) five minutes but was subsequently to mutate in live performance into the monster of all drum solos. It’s useful to compare the rougher balance of the mono mixes, but the stereo mix makes good use of channelling and multitracking while retaining a realistic band landscape. The non-album single tracks, Wrapping Paper and (the chart-topper) I Feel Free, are included, as are alternate-edit versions that appeared on French EPs and a fairly meaningless two-part splice of Spoonful that graced a forgotten UK single.

The third disc of this set brings more early versions, outtakes and alternate mixes, including a “karaoke” (i.e shorn of its lead vocal) version of I Feel Free; a Sweet Wine that’s bedecked with a subdued, treated guitar solo completely different from the searing one on the final issued track; and a version of respectable album outtake The Coffee Song that degenerates into manic laughter. The only previously released cut is You Make Me Feel, which formerly appeared on the (then-all-embracing) 1997 Polydor compilation Those Were The Days. The third disc also presents 14 tracks (and two interview segments) recorded at BBC radio sessions between November 1966 and January 1967, which fascinatingly contain nascent versions of Crossroads and harmonica showcase Traintime, as well as rare takes of Steppin’ Out (an instrumental familiar from Clapton’s Mayall days) and Lawdy Mama. Back on the second disc of this edition, we find the still-magnificent-sounding stereo version of the full album plus the singles tracks, The Coffee Song, and seven assorted, previously unreleased “new stereo mixes” (provenance uncertain, since I don’t have access to the booklet notes). OK, so a couple of these may not add anything very significant, but the whole batch is useful and worth having, not just for the completists – and all demonstrating just what a superlative team the three musicians made when they got together. What chemistry!…

This deluxe edition comes initially as a 3-CD +1-Blu-Ray Audio Disc set described thus: “housed in a gatefold sleeve within a rigid slipcase and including a 64-page hardback book, featuring new sleeve notes by respected Rolling Stone writer David Fricke” – I wonder whether he gives the definitive answer to the hoary question of the true meaning of the track title NSU (sadly, reviewers these days aren’t ever accorded the privilege of accessing any of the package beyond the music tracks, so I’m unable to enlighten you…). And finally, I’m told that a special 6-LP 180g vinyl edition of Fresh Cream will be released in April.