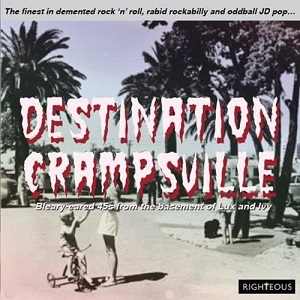 
This latest trawl through the personal collection of The Cramps’ Lux and Ivy promises “the finest in demented rock’n’roll, rabid rockabilly and oddball JD pop”, and proves itself a worthy successor to the (hopefully ongoing) series of “Cramps’ jukebox” compilations issued by this label in recent years.

It follows the now-accepted pattern in bringing to the surface a whole cartload of “so bad they’re good”, gems of sometimes dubious musicianship and often equally dubious taste that have lain buried for far too long. All I can do to persuade you to buy this set is to cherrypick and give you a flavour of the delights within its two-hour span. Steamy saxes, twangy guitars, exotic rhythms, trashy vocals, superderivative riffing, nigh-indecipherable lyrics – this wacky collection has ’em all, and more besides. Scarily irresistible is the only word for seriously weird cuts like Strange Enchantment by Leo Diamond’s Orchestra (from 1957), Congo Mombo by Guitar Gable & the Musical Kings and Cherokee Dance by Bob Landers (both from 1956), but memorable in a different, almost visceral way are The Tingle by Jackie Weaver (1961), Waddle Waddle by The Bracelets (1962), Wyatt Earp by The Marquees (1957), And stuck in the middle of all this weirdness you’ll find “name” artists like Little Eva (typical Goffin-King teen drama), The Ikettes (The Gong Gong Song!) and Don & Dewey. And that’s just on the first disc – the second disc is also stuffed full of vintage pop dementia and barely controlled rock’n’roll angst, highlights being the outright nonsense of Crazy Talk (by The Loafers), Smoochin’ In The Sewer With Louie (by the Empalas), The Cat (by Rod Willis) and Primitive Love (by Tom Reeves). And I can’t resist mentioning Crazy Billboard Song’s clap-happy litany of ads (from The Miller Sisters) and the pair of insane, slightly wonky instrumentals by The Mad Plaids from 1959. Oh, and there’s another track by the incomparable Gin Gilette (Train To Satanville). In the company of which, Bobby Parker’s Watch Your Step sounds decidedly “normal”, and almost out of place here!

Supporting documentation is (fittingly?) sparse, with dates of first release the only clues (and even then some are mysteriously absent from the listing). Recording quality is necessarily variable, but it’s always more than acceptable and in some cases suspiciously good (Shelley Farabes’ Johnny Get Angry, with its stereo images and kazoo break, and the slinky instrumental The Spook by Pete Drake, which sounds rather later than the listed date of 1962).

But me, I’d rather listen to this kinda wilfully obscure reject-stuff all night than most of the state-of-the-art digital outings that make the grade. Roll on the next volume!

Keep Your Hands Off My Baby