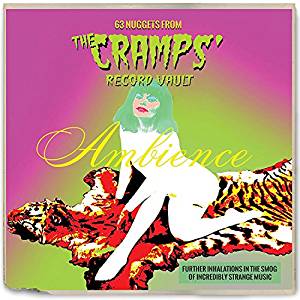 
This two-disc treasure trove is the latest (fifth, I believe) in an ongoing series of compilations from Righteous that gathers together a host of seriously obscure goodies from the gargantuan record collection of The Cramps’ Lux and Ivy. They’re billed as “63 tunes that scared the neighbours” (or the horses?) – well, they probably wouldn’t today, but hell, is there some magnificent, rabble-rousing music here! The sleeve note promises “plenty of cool things that have to be heard to be believed”, from “moments caught in a time when reasoning was dispatched out of the window and a herd of couldabeens stalked the studio”. So this is a non-stop parade of unashamed hi-octane also-rans, “no hit wonders” with no pretension towards anything other than having a good time. Judging by the sound of these sides, I’d estimate that the vast majority of them date from the golden age of rock’n’roll – late 50s through to early-mid-60s – and while the sound quality of some is distinctly lo-fi the remastering has brought the best out of the often primitive recordings.

I guess you could brand most of the cuts as novelty records, but that’s in the positive sense of new sounds… something different, strange, weird and wonderful or just plain wacky. And probably nowhere more ingenious than in the hoary bonehead realm of the 12-bar instrumental in all its permutations; the disc includes plenty of these gems, of which The Majestics’ manic Riding By, Duane De Santo’s real Cool, the joyful mayhem of The Noisemakers’ Panic and the totally silly cod-Jap chant of The Highlights’ Ah So! are the standouts, with The Vice-Roys’ lazier-tempo Moasin’ and Terry Snyder’s loungecore Blue Tango providing a tasty contrast. Jo Ann Castle’s Cherokee is a showpiece for virtuoso rogue accordion, while The Gravestone Four’s sax-led Rigor Mortis is more animated than it has a right to be! Yeah, it’s amazing how much territory can be covered in just a few seconds under two minutes! While the markedly less rewarding House Party by The Party Rockers is exactly what it says on the label.

Outside of the “insane instrumentals” bracket, we’re treated to several gems from the “so bad it’s good” camp, including the risible vamped-up trash-horror of I Was A Teenage Creature by Lord Luther & The Kingsmen, Gene Maltais’ unbelievably over-emoted Deep River Blues, the sub-Jungle-Rock tribal beat of Joe Wallace’s Leopard Man, and Kay Starr’s swinging Headless Horseman. Jay Fanning’s It’s Love, The Tempests’ Rockin’ Rochester USA, Clyde Stacey’s Hoy Hoy and Sweetie Jones’ Baby Please Don’t Leave Me all provide killer examples of the over-the-top, wild-man-let-loose school of minor-league rock’n’roll and rockabilly. And many of these come complete with killer solos to match.

But amidst the unapologetically cruddy (OK, even crud can be gud!) or cheesy fare, there’s also a lot of pretty good music on offer. I enjoyed the eccentric classic twang-with-flute-obbligato of Betty McQuade’s “lurve-gone-wrong” lament Midnight Bus, the scratchy hardcore doo-wop of the Mississippi Mud Mashers’ Moonglow and the hep hot swing of The Cats & The Fiddle’s Killin’ Jive. Don French’s Lonely Saturday Night keeps us just the right side of howlin’ mournful. And hey, there’s even a guy named Buddy Miller credited with the full-on saxer Teen Twist (it can’t be the same one can it?).

I can’t comment on previous volumes in the series, but the one disappointment with this otherwise well-appointed set is the entire lack of discographical detail (I’d have expected at the very least to see a recording/release date in brackets after each title, even if the production budget doesn’t run to the provision of any researched information on the recording artists themselves, the material or their labels).

These records “snook out on plastic in the middle of nowhere”, so needless to say, if you were collecting the original vinyl issues of these “no hit wonders”, you’d be bankrupt many times over. This set is a feast for those cannibal music-junkies who maintain the belief that pop will indeed eat itself.

So many records, so little time… Records like this will never be made again – so rejoice in ’em now.