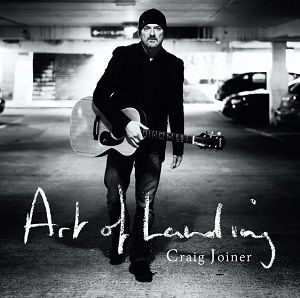 
A member of British rock outfit Romeo's Daughter since their inception in 1987 and reformation in 2009, Joiner's also carved a successful career in library music as well as providing songs for the likes of Heart, Bonnie Tyler and Eddie Money. This, his solo debut, finds him very much of an acoustic folk persuasion, playing guitar, mandolin, bass and bodhran with occasional contributions on cello, double bass and whistles.

He has a light and attractive easy on the ear vocal reminiscent of Blair Dunlop while his songs are never less than melodically catchy with audience-friendly hooks and choruses, the airy opening growing-up themed title track and jogging rhythm faltering relationship 'Messing Around' being early cases in point.

He slips in the sole cover at the top end, a faithful reading of John Martyn's 'May You Never' that, using guitar body hand percussion, surely nods to one of his influences. It says much that his own material isn't diminished by its company, whether strumming through 'Making Of A Life', taking a more anthemic chorus approach with the whistles-coloured Stand or including to bluesier acoustic picked folk territory with 'Time To Go', another incipient break-up number.

There's not a skip button track here, but particular joys would have to include the ineffable romantic anguish of 'Tongue Tied' and the forceful dynamic of 'Emily Benton', a chorus soaring song poignantly remembering a lost love who slipped away from this life, which, even so still feels little odd given it's immediately followed by 'Lolly Song', a lilting waltz for his wife Lolly who, alongside Mick Finn, provides the album's backing vocals.

He closes with the brief fingerpicked 'Mr 'O'', here recollection of a perfect day and a perfect soul, another simple song in memory of someone close gone before their time, a beautiful end to an unassuming but hugely impressive and immensely listenable album that should see Joiner's new career path every bit as successful as his others.