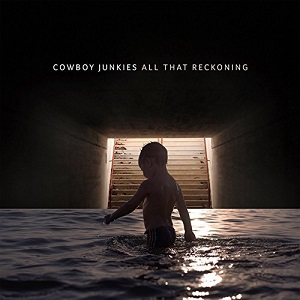 The Cowboy Junkies
Album: All That Reckoning
Label: Proper
Tracks: 11
Website: http://www.cowboyjunkies.com
.I go back a long way with the Cowboy Junkies, "The Trinity Sessions" was one of the first albums I ever reviewed and remains one of my all time favourite albums. At the time I was still into post punk and new wave, but had already started exploring other musical avenues and the Cowboy Junkies were like nothing I had heard before. Where most of the bands I was into spoke with a loud voice, Cowboy Junkies spoke with a whisper and by doing so made sure they were heard.

It's 30 years since "The Trinty Sessions" and six since their last album, "The Wilderness", the fourth and final part of the self released Nomad Series. Remarkably in their existence, the line up has remained consistent, The Timmins siblings Margo, Michael and Peter with Alan Anton, though there has been variation in the sound more folk, less folk, more country, less country, more rock, less rock, louder, softer, though always imaginatively delivered.

To me they have remained a band that can always deliver the atmosphere of their live sets in the studio and vice versa, without ever confusing the two distinctive roles, the live sets always feeling very personal, very intimate, the albums always felt they could occupy the space allocated to them, "All That Reckoning" is no exception and I'm really looking forward hearing it live.

The Cowboy Junkies still make albums and by that I mean there is a beating heart and soul that permeates the whole record, rather than it being a collection of songs. That does not make it a concept albums, rather a body of work, that complements and counter balances the songs around them, linked by Margo's crystal toned vocal that seems to work from piano to forte.

I'm always reluctant to recommend "The Trinity Sessions" as the starting point for a new listener to the Cowboy Junkies as there is something to be said for coming at it through their other works, "All That Reckoning" has definitely become my new reference point. This album has been my journey to and from work pretty much since I was lucky enough to get the promo and it's been a while since any recording has done that. Selfishly I wanted to keep it to myself, but it's time to be grown up and share. "All That Reckoning" is an absolute joy to discover time and time again, The Cowboy Junkies are back, whisper it softly.

Sing Me A Song