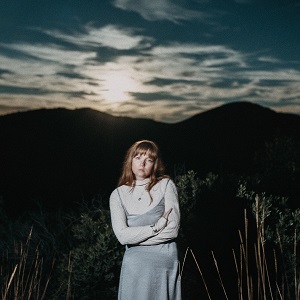 
'Old Flowers' is a bunch of new songs from the increasingly popular Courtney Marie Andrews. It's an album whose theme has some synergy with the loneliness touched upon with earlier songs like 'Table For One' on 'Honest Life' and 'Lift The Lonely From My Heart' on 'May Your Kindness Remain'. Here, she has produced a classic breakup album delivering different perspectives on the loss of a long standing relationship.

This time out, compared to previous records, the musical approach has often been stripped back to focus on a sparser sound. A combination that likely reflects the writing of many of these songs. As she says, "These songs came to me alone, late nights in Bisbee, Lisbon, Nashville, and London. Sometimes I'd just cry and sing, and a song would come out. I drank too much wine while writing this record, lit too many candles."

The album opens with the beautiful 'Burlap String' which references tying old flowers up as a reminder of better times. Whilst that flowery mention might be seen as the inspiration for the album's title, in fact, there is a title track which tells us that you can't water those old flowers to bring life back. As you'll see in this clever juxtaposition of songs, she has a poetic way with words that is part of the charm of her songwriting.

The sparseness of songs like 'If I Told' allow her sensitive vocal work to be used to its full power without spoiling its delicacy. Often, like on 'Carnival Dream' and 'Together Or Alone', her main accompaniment is a piano which allows the tension in the song to develop. Sympathetic arrangements with touches of light percussion, for example, allow that tension to move back and forth.

While 'Someone Else's Fault' has an uplifting beat, much of the record is a soul bearing affair that reveals more than most breakup records. The most intense moment coming with 'How You Get Hurt' before the record closes almost in a sigh of relief with the goodbye of 'Ships In The Night'.

So, fans of her earlier records may be slightly surprised at the way that this latest record reveals heartbreak through sparse, yet subtle, arrangements. However, 'Old Flowers' allows Courtney Marie Andrews' ace cards to be played with some beautiful songs from one of today's finest emotive vocalists.