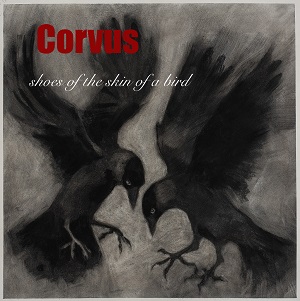 
Corvus is a duo comprising Mike Billington and Bill Pook, whose main stock-in-trade is sung and spoken renditions of the latter's writings done to accompaniments both orthodox and pleasingly exotic. Note also that both men are highly competent practitioners of an astonishing array of musical instruments that would put the Incredible String Band - though perhaps not Tim Moon! - to shame. Guitars, Indian harmonium, keyboards, Appalachian dulcimer, bowed psaltery, kalimba, glockenspiel, recorders, hurdy-gurdy, Tibetan singing bowls, and a veritable plethora of percussion: plenty to fire the imagination here. then.

I reviewed the duo's earlier album (the decidedly intriguingly titled Gloves Of The Skin Of A Fish) back in the autumn of 2009, and if you have since made its acquaintance and have in any way succumbed to its idiosyncratic niceties then this new, similarly teasingly titled collection will also delight you muchly. Their disc tray photo encapsulates the whimsical, slightly eccentric "English afternoon-tea-on-the-lawn" ambience of their musical adventures; the phrase "tea and symphony" comes to mind, not entirely unbidden, when I listen to tracks such as the fanciful Gardening With Numbers and, in a more literal sense, Poison Be My Friend, which couples a folksong from the tea-growing regions of Darjeeling and Assam with an Australian myth…but I digress…

Half of the album's tracks are compositions by Bill; all but one of these (Gardening With Numbers) include passages of spoken word or narrative while the most surreal of them (Men's String Vests, Billy Eats Fingers, and Bartek And The Flies) are entirely spoken, to disparate, quite minimalist musical accompaniments, and the pithy Lady Poem is cradled within a shrill bagpipe tune. At times, as on Bless The Child, the Corvus brand of quirky humour recalls Dr. Strangely Strange; Bill also sets a poem by e.e.cummings, with a setting that put me in mind of COB, In between Bill's own compositions we find one natural foil - Ivor Cutler's Go And Sit Upon The Grass (which comes across like an Appalachian kids- playground song) - along with some rather more unusual (and perhaps unexpected) bedfellows in the shape of a pair of covers of songs by The Decemberists' Colin Meloy. First comes the epic Mariner's Revenge (from Picaresque), which, being robbed of the original's headlong rollicking klezmer-accordion charge and much of its drama and momentum, feels unduly restrained; and secondly - and altogether more successful - comes Shankhill Butchers, that splendidly eerie meditation on violence and terror from 2006 album The Crane Wife, which mirrors the sinister mood and measured pace of the original version. The remaining two tracks are trad-arr excursions: False Knight On The Road is fairly standard, but Twa Corbies becomes a brooding would-be-epic festooned with fuzz guitar and doomy drone which is let down by a rather matter-of-fact, detached vocal; the familiar tale is then succeeded by a jubilant bourée played on the hurdy-gurdy - a curious combination indeed.

At times, Corvus' two musicians seem to audibly relish the weirdness of their musical activities, and clearly feel no obligation to conform to any expectations; that said, their brand of creativity is also very winning and surprisingly accessible. D' you fancy a nice cup of tea, then? How very civilised…