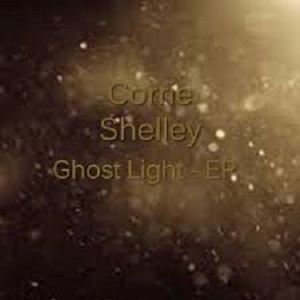 
For those new to the name, Corrie Shelley is a talented singer-songwriter from Lancashire who delivers 'assured and eminently listenable music'. Following on from her 3rd album, 'Forget Me Not', is the release of a 4 track EP - 'Ghost Light', and what a stunner it is.

Opener, 'Mother Earth', an unaccompanied song recorded live at All Souls Church in Bolton, Lancashire, benefits from the acoustics of the building, as Corrie's crystal clear voice resonates celestially as the song unfolds, highlighting as it does, the damage we are doing to our planet. Using personification to add effect, this plaintive cry carries much weight

"We have taken much more than we've ever giv'n
then we pray to our gods in the hope we're forgiven...
...blind to the facts,
that Our Mother, she's dying, we won't get her back" (my lyric transcription from the audio)

As with previous releases, narrative and storytelling are important components in Corrie's writing. The second song on this E.P. 'Wedgwood's Daughter' was written as a 70th birthday present for her mum's husband, who is the Great-Great Grandson of Eliza Wedgwood. It recounts the story of how Eliza was disowned by her family for falling in love with a miner from Wigan. Accompanied by a single acoustic guitar, the songs presents as a madrigal, as the words drift around the gentle, lilting melody creating a delicate filigree-like atmosphere.

The two other tracks were written during the Lockdown, with the title song being dedicated to all the theatres around the world who have left a 'Ghost Light' on whilst the doors are closed, as a promise to the theatre that they will return, viewing the current situation as just an extended intermission. From the shimmering opening chord to the final note some four minutes and 26 seconds later, this song is nothing short of exceptional. The short electric guitar solo mid-song is unexpected, but totally apposite, whilst the ear-worm of a chorus remains in the memory long after the song has ended. The production on this E.P. is first class, and here, once again, it allows the listener to fully appreciate what a wonderfully emotive singing voice Corrie has. These are indeed strange times in which we are living, and were there to be any justice in the world then this beautiful song should be viewed as an essential track on any potential 'Lockdown Anthology'.

The final song, 'See You On The Other Side' is Corrie's message to her friends and family, and eloquently expresses her thoughts that although she cannot be with them at the moment due to the Covid 19 situation, they are never too far from her mind. Accompanied by some exquisite guitar playing from Merry Hell's John Kettle, this is another enchanting song that will both mesmerise and resonate with all experiencing the issues mentioned in the lyrics. The optimism for the future that shines though, however, is the message to be heeded and taken forward, and Corrie is to be thanked for that.

Ghost Light is a superb E.P. from an excellent singer-songwriter who continues to go from strength to strength, and cannot be recommended highly enough. To unashamedly take from her lyrics to the title track, this release will
"... take you to magical places
and fill you with joy and delight...
... and bring you tears..."

Ghost Light EP is only available for digital download Bandcamp and was released on Friday 5th June 2020.