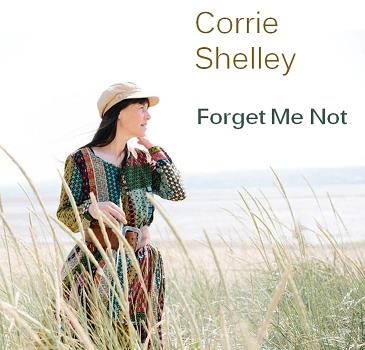 
With the release of her third studio album, the previous two having been launched in quick succession following a thirty year hiatus away from music, Corrie Shelley confirms that she is a talented singer song-writer delivering assured and eminently listenable music.

As with The Leaf and The Cane, reviewed in FATEA here by editor Neil, the range of topics covered is truly electic, covering, for example, World War 2 child evacuees, the Scottish Highlands and the Battle of Culloden, together with reflections on societal issues. Several songs, however, are also much more personal, and relate to familial loss and love.

Thus opening track, the jaunty, autobiographical I Wish I'd Listened, an Americana-tinged song, is a true story about Corrie's first wedding day, the advice given by her father and the subsequent break-up of that marriage due to alcohol abuse, albeit with no apparent regrets

'I wouldn't change a single thing, coz it's made me who I am'

With Alice, Corrie's lyrics reflect upon her mother-in-law's experience as a child evacuee in a song which amply demonstrates what a fine voice she posseses, accompanied by some delightful acoustic guitar playing. Continuing the 'famil' theme, My Hands is a wonderfully upbeat song about her son that sets the feet a-tapping, whilst benefitting from espousing sentiments that could just as easily refer to a daughter.

Clocks, the first single release from the album, is one of the standout tracks. A wonderful tribute to her late grandfather, Arthur Frodsham, a Class A Gold Medal winner in the 1969 8th Stoke Mandeville International Games, (forerunner to the Paralympics), this moving song should resonate with anyone who has lost someone dearly close to them. Delivered in a suitably mournful voice with tasteful harmonica, the background percussive tick-tock is perfectly in keeping with the sentiments and title of the song.

With one exception, all songs are written by Corrie, who also plays guitar, ukelele, shruti. On the recording she is joined by Stephen Shelley, (drums, percussion) and Les Hilton, (guitar, lap steel, harmonica). In addition to providing additional guitar, bass and drums, the record is both produced and recorded by Merry Hell's John Kettle. Further Merry Hell connections are provided through a co-write credit with Bob Kettle, together with a credit to über-fan, Nicki Louise (Chonkinfeckle), who is the featured bass player on Clocks

The production values on the CD are such that the fine instrumentation and musicianship subtly enhance and embellish, rather than overpower, throughout, thus allowing Corrie's enchanting voice full opportunity to shine through.

Narrative and storytelling are potent elements in Corrie's writing, and I detect underlying themes of personal strength and resilience running through many of the lyrics. On The Box, to the accompaniment of some fine pedal steel, she asserts

'My heart will no longer be broken, you no longer hold the key
All the feelings I had for you, you took when you left me'

whilst Here Comes The Rain, a more up-tempo, rocky track, contains the lines

It is Recognition, a brave song with its lyrics alluding to memory loss, possibly Alzheimer's disease/dementia, however, which rips at the heart. Whilst potentially making for a difficult listen for some, failure to be moved by this song probably renders the listener beyond redemption.

No she doesn't know who I am anymore
But I'll always say 'Hi mum' when I walk through the door....

In contrast, the penultimate track, Sit Down Together, co-written with Bob Kettle is a song of indictment on the current state of the world, whilst simultaneously being an uplifting call to arms come vision for the future, complete with anthemic chorus, that is surely destined to be a live favourite

'Let's sit down together, let's stand side by side
Face one another share each other's pride
Let's all agree we each have a place
Coz aren't we all part of this human race?'

Closing the album is Big Man, a pessimistic track which nevertheless chugs along to a Hank Marvin-style guitar sound and bluesy harp, again showing off the versatility of the musicians involved.

Forget Me Not is a classy album from a talented singer-songwriter with an alluring voice which deserves to be heard widely.