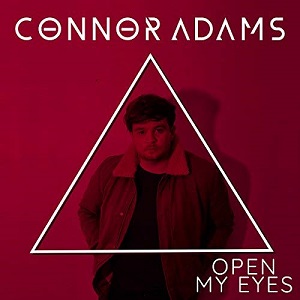 
Two years on from his 2016 debut EP, Locked Doors, rising star Connor Adams is back with the six track EP Open My Eyes. It's been a busy year for Adams including supporting The Darkness, sessions via BBC introducing, reaching number 5 in the singer-songwriter chart on iTunes, and some sell out hometown gigs. He's also finished an In The Round tour with Jerry Harmon and Steve Young. Clearly not one to sit back and rest on his laurels, 2018 doesn't look like it is due to get any quieter.

In terms of style, Adams produces the kind of acoustic alt pop that is very popular at the moment. There's touches on display of artists as diverse as Ed Sheeran, Kelly Jones, and even a little Dave Grohl. That's not to say anything feels derivative, but it is clearly a release of its time. Since You Came Around is the kind of upbeat song complete with a funky beat that could stand shoulder to shoulder with anything produced by the likes of Rag n Bone Man. Recent single Adventure is probably the pick of the six, with a tangible sense of desperation and desire to experience something else. Behind All The Lies is another highlight, positively bouncing along but with real depth and emotion to the lyrics.

The depths he mines are impressive, and the raw honesty and emotion displayed give his music something extra. While there is nothing here that breaks new ground, it is heartfelt, full of warmth, and always captivating. It's easy to see why Connor Adams is gaining new fans all the time.