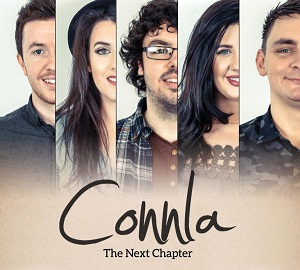 
“The Next Chapter” is the sophomore album by award-winning Northern Irish band Connla and the follow-up to their superb debut “River Waiting”,which was released in 2016.

I was fortunate to see Connla live in October 2016 and was immediately impressed by their energy, originality and virtuosity . I reviewed their “marvellous performance” for this very magazine and my review can be found in the Live Reviews section for October 2016.

“River Waiting” was one of my favourite albums of 2016 and I have been looking forward to its follow-up with great anticipation. How does “The Next Chapter” compare with its highly-rated predecessor?

The new album has a similar structure to that of “River Waiting” , in that it has an appealing blend of self-composed instrumental tracks and carefully chosen cover songs, the latter all beautifully sung by Ciara McCafferty .

The album begins with a tremendous instrumental , “Organised Chaos” which was written by Conor Mallon [pipes and whistles] and guitarist Paul Starrett. The slightly menacing opening gives way to a calmer, melodic middle section before returning to the original “chaos” theme.

Ciara’s vocal talent shines through on the five songs on the album, beginning with a lovely version of the American traditional song “Wayfaring Stranger” which also features Emer Mallon’s sparkling harp along with some lovely whistles and pipes. Ciara delivers another superb vocal performance on Rhiannon Giddens’ haunting “Julie” ,which imagines a conversation between a slave and her mistress during the American Civil War.

Northern Ireland is blessed with some wonderful female singers, notably Cara and Mary Dillon , but Ciara’s tender reading of Sean Tyrrrell’s “One Starry Night” puts her up there with the best of them.

“A Sweet Future/Mighty Makena’s” is a sprightly, playful instrumental by flautist Ciaran Carlin to which Paul Starrett adds some delightfully incongruous jazz guitar. Paul’s own “The SS Baychimo” demonstrates not only his formidable guitar technique but also his compositional skills. Featuring Paul’s nimble guitar, Emer’s lyrical harp and the Arco String Quartet, this gorgeous Spanish-flavoured instrumental is named after the mysterious “ghost ship” which was abandoned by her crew in 1931 ,only to be sighted periodically up until 1969 when she disappeared for good! This atmospheric piece segues seamlessly into harpist Emer Mallon’s “Matinee at Charlie’s” ,another typically powerful Connla instrumental.

This fine album closes with “Cosmo’s” ,a delightful set of tunes by Ciaran Carlin which showcases Connla’s stunning ensemble playing to great effect.

Connla will be touring the UK in April , beginning with The Atkinson in Southport on 4th April . I know where I’m going to be!