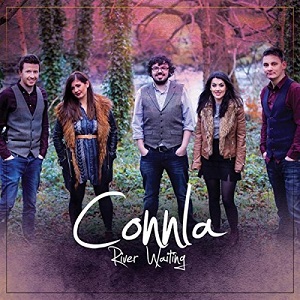 
This young five-piece band is the latest hot property to come out of Northern Ireland; its members hail variously from Armagh and Derry, and their musical journey began after completing their studies at Ulster University, with the release last year of a taster EP, which by all accounts was mightily impressive (although sadly it didn't get to my ears). For Connla's full-length debut album, however, the emphasis switches to self-penned material, with eight of the dozen tracks featuring original compositions by band members. The self-confidence in their own compositional abilities is clearly concomitant with the tremendous assurance of their playing. They're unafraid to take a longer view of the music, feeling no need to rush through the notes to prove their technique, and the result is a triumph of an album that thrillingly celebrates their virtuosity over a variety of musical scenarios.

Connla set out their stall with an imposing, moody and menacing-sounding minor-key slow reel penned by the band's flute/whistle supremo Ciarán Carlin, setting the scene with flute backed by just an insistent bass line and gentle guitar before harp and uilleann pipes join the fray on the build to the swifter tempo of the second reel in the set is ushered in with percussion. This captivating introduction to Connla is followed by the first of the disc's five songs, Moon And Stars, written and sung by Ciara McCafferty in a more contemporary pop-folk idiom that suits her sweet-toned voice - as does the album's title song, a joint composition with Connla's guitarist Paul Starrett. Of the remaining songs, David Francey's Saints And Sinners is also charmingly and vibrantly rendered, but even better is Mary Dillon's tenderly yearning opus The Boatman, while perhaps the most successful to my mind is Daily Growing, a version of the traditional Trees They Do Grow High that's taken at quite an urgent lick and ingeniously tagged and interwoven by the fast reel Willie Curran's. Back to the instrumentals, the lyrical quality of Paul's guitar playing is to the fore on his own limpid tune For Doc and in telling counterpoint with Emer Mallon's harp on her lovely tune The Enchanted. On the swifter paced tune-sets, the sensitivity of the instrumental interplay within the ensemble work is noteworthy, and the warm individual contributions share the virtue of artful understatement. And piper Conor Mallon comes into his own on the sparky Iridescence set, which features two of his own tunes and one by Ciarán.

Finally, the quality of the album sound is stunning - it's jointly produced by the band and Seán Óg Graham (it was recorded in Seán's Co. Antrim studio). At the risk of repeating a critical cliché, this is a highly recommendable disc from a band to keep a close ear on.