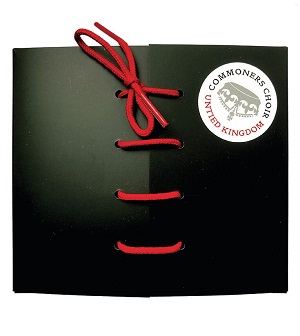 
With 'Commoners Choir', their debut CD of 2017, the self-described "rag-bag assortment of ne'er-do-wells..." announced their arrival to the wider world, with their songs of protest, anger, humour and hope. Following this up with a vinyl only 7" release, 'Choiral Scratch', a collection of half-a-dozen "singalong protest songs" they continued to goad, whilst at the same time entertain. The latest release from this northern-based, inclusive 'community choir', (in the most literal sense), not only continues in this vein, but also, in many ways, extends and develops the very concept of what a choir actually is.

'Untied Kingdom', not a typo for United, is as deliberate an anti-establishment message as their upturned crown logo, the lack of an apostrophe in their name or their use of William Morris' Golden Type font. Over its 12 tracks, which question our identity as a nation, both past and future, our sense of belonging, or absence of, it also seeks to examine how we can gain some sort or understanding or interpretation. "Untied Kingdom is not a state-of-the-nation album" rather "it's a wondering about the state-of-the-nation album". Yes, the songs, primarily via four-part harmonies, continue to rail against inequalities and injustices, and relate to work, home and play, but there is a sense that rather than highlighting any perceived differences, there is a profound emphasis on commonality and even greater inclusion. This includes credit for contributions, in a variety of forms, from the likes of Manchester's She Choir and Stockton's Infant Hercules Choir, Leeds Harmony Choir, the Boliyaan singers, O'Hooley & Tidow, Mark Thomas, Beccy Owen and Neil Ferguson.

Alongside this theme of celebrating the things we have in common there also runs a thread of resilience.

Opening track, The Skelmanthorpe Flag Song, encapsulates both perfectly. Taking lines from words painted on a flag by villagers from Skelmanthorpe, in support of the victims of the Peterloo Massacre in Manchester, album notes explain "the song was written in defiance of the petty regional differences that keep us divided...". The closing lines too are emblematic and could capture the entire album, "We've more in common, Than divides us". Whilst resilience in communities informs Airstrike 1,2,3, which juxtaposes the somewhat chilling Yemeni children's game emulating Saudi Air-strikes with UK arms sales, specifically BAE involvement, a more personal example is provided in One Breath At A Time which relates to mental health issues, albeit in a far from morose or maudlin way.

We Are Descendants proudly and defiantly pays homage to a litany of historical forerunners, including Stonewall Rioters, Jarrow Marchers, Suffragettes, Diggers and Levellers, Cable Street fighters, in a song which makes no attempt to conceal its message, eschewing metaphors and getting right to the nub of matters "We are the descendants of the striking miners, And we are coming for you". It may be a long journey, as the self-same protagonists are also "on the road and walking back to Wigan Pier" in a memorable song which sees George Orwell, figuratively, joining them on that walk.

Whilst there are two or three short, vignette tracks, in contrast to their eponymous debut where all songs were less than four minutes long, here 50% are of a greater length, and, in addition to the external contributions outlined above, listen carefully and you can detect mill machinery, akin to that which inspired Poverty Knock, or more recently that which features in Danny Pedlar & Greg Russell's Field & Dyke project, percussion and keyboards. Another very appealing and inclusive feature is the use of brief, interstitial tracks, delivered in a variety of languages, Arabic, Bulgarian, Hebrew, Irish, Punjabi, Spanish, Swedish and Welsh, by people "who live here, with us and around us", indeed, it might be said 'are us', which act as a thread joining the main songs together.

Centrepiece of the album, although it has to be admitted there are several contenders, and I'm sure listeners will each have their own, might well be True North. Written for The Great Exhibition Of The North and celebrating all things northern, at over 7 minutes, it is nothing short of being an epic track. Citing so many northern institutions, locations and luminaries could easily have opened them up to lazy, stereotypical criticism, (indeed it may do), but that would be erroneous. What is created is a very visual patchwork, and ultimately a powerful statement, of identity. "History's needle points to North" they sing, but significantly, for a group for whom being a radical walking collective is of equal import as singing, "And all our favourite seats of power, Are trig points on the peak".

Spinning Home and Coiners Song continue, unsurprisingly, the north-centric emphasis, the former being part of a trilogy of songs written for the 2019 Woven Festival in Kirklees, the latter relating to the activities of the 18th century Cragg Vale Coiners counterfeiting gang. The poignant Come On In From The Cold, however, is another reminder of the times in which we live. Broadly concerning child poverty, but specifically recounting the true story of an East Leeds primary school Headteacher who opened his kitchen to feed pupils even though the school itself had been closed due to heavy snow, it contains a line which would be equally apposite on merchandise, "Whatever we've got is whatever we'll share".

With the booklet accompanying the CD outlining at least a dozen reasons why they shouldn't sing it, we are treated to a gloriously loud and defiant minute's worth of Carmen Etonense, the Eton School Song, which showcases in excelsis just what a proficient and fine-sounding choir the Commoners can be, even when singing in Latin and extracting the Michael to the nth degree.

The closing track on the album, Not The National Anthem, also has a written explanation of great length, mirroring the song itself. Whilst many would argue that a new national anthem is long overdue, Merry Hell's Come On England immediately springs to mind, realistically, perhaps deliberately, the Choir acknowledge that this is far from being a contender. Its mere length alone, at just shy of eight and a half minutes, would, (research tells me), outlast the world's current longest anthems, the 158 verses of the Greeks, (albeit almost always played 'abridged'), or the 105 bars of the Uruguayan offering, which takes a mere four-and-a-half to six minutes. The sentiments expressed, however, in this " state-of-the-nation song about a nation in complete confusion and crisis", underline the Commoners commitment to hope, anger, joy and community.

Gently chided by creator of the choir, Boff Whalley, for labelling him, in a previous review, "a fell-running polymath", it's probably time to change my description. Merely start the quoted phrase with the words 'an inspirational'. He would no doubt disagree, and point to the community and sharing aspects inherent in the DNA of the Choir, but what a talent to be able to organise authentic people to sing authentic songs with authentic messages to such telling effect.

Whilst protest in song is patently not a new concept, Commoners Choir have cornered a market, that fecund space between high quality four-part harmony and music as social protest. Their work has created a thought-provoking time capsule for future ethnologists, together with musical and social historians.

A University of Limerick paper from 2018 claimed that "protest songs may not change the world by themselves, but they have the capacity to change the minds of people who in turn can certainly change the world". There would be no better place to start than by exposing as many ears as possible to Commoners Choir.