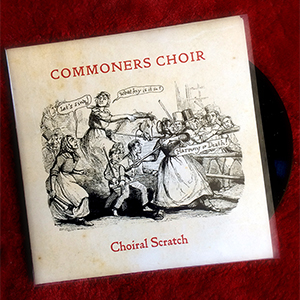 
Following the runaway success of last year's storming debut album by the Northern-England-based Commoners Choir, Boff Whalley and his staunch vocal ensemble have now produced a 7" vinyl artefact (love the title by the way!) that aims to furnish today's demonstrators with some melodic and tuneful protest songs specifically for singing on protests.

The accompanying sleeve note observes - rightly - that people don't tend to sing on protests here in Britain, but tend instead to bark out "monotone call-and-response chants, or at best bellow spontaneously". Such chants lack imagination, and make protest sound flat and uninspired; and so Boff has written six communal "singalong protest songs" for us, in canny acknowledgement that "there's an inclusive sense of welcome in a melody" - we need not be afraid of melody (or for that matter, harmony), for "melody can carry anger as well as any chant" - as the invigorating performances of the choir on this disc prove. One song (Take Back The Commons) also brings in a drumming band for an infectious Bo Diddley shuffle beat…

Recorded at "scratch" rehearsals, inevitably a touch rough'n'ready, but rescued from lo-fi hell!"; memorable and undeniably effective, these six songs are short and easy to pick up, simple both rhythmically and in terms of arrangement, and (importantly) fun to learn and sing! They unashamedly address things that are in the news right now (and OK, so what if some of 'em are disposable then?), but so many issues, such as injustice and racism, will (it seems) never go away, so these songs may well need to evolve rather than be jettisoned when something more "sexy" comes along. And of course, "there's no fake news, just lies"…

If the six protest songs on this EP float your boat, then you can find a few more on the Commoners Choir YouTube channel, including some that were previously outed on the choir's aforementioned full-length album. But hey, we're not in a different kitchen, and this is a clear case of never mind the Buzzcocks, feel the wit!

The Have Nots & The Haves