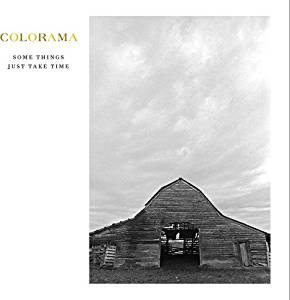 
Given the title it is perhaps inevitable that Carwyn Ellis, aka Colorama, should have spent the last ten years making this album, but such cynical thoughts are dispelled by the end of the first bar of the first song, Halcyon Days, with its gently plucked intro paving the way for a long slow vocal sigh. It's a meticulously well-crafted introduction to a beautifully made record that speaks for every ounce of producer Edwyn Collins' wealth of taste and experience. Gawd bless them ears!

Ellis is not the first singer songwriter from these Isles to take inspiration from across the Atlantic Ocean and his songs speak loudly of the American songbook that's made up of strong stories and apparently simple structures that on closer inspection are revealed as anything but.

The tightly packed narrative of So Long is brilliantly soundtracked with a woozy run at the luxuriant instrumentation of Al Kooper at his most restrained. Meanwhile the title track invokes the richly toned spirit of Glen Campbell and there's a crafty steel guitar (BJ Cole, inevitably) on Special Way that fills out the vocal perfectly. Heartache is never far away and on It's Not You the singer becomes a small child who finds a grown up at rock bottom - it's a heartrending story matched only by the sorrowful croaked resignation of Give It A Miss and the achingly beautiful In Your Memory in which a miner trapped deep underground writes a forlorn note to his sweetheart at the pit head.

Don't think for a moment this is humdrum imitation Americana, it isn't. Some Things Just Take Time is instantly recognisable as British (or Welsh) and Ellis sings in his own completely engaging voice, but his songwriting is refracted through the prism of American traditions, which is true of the overwhelming majority of British pop music for a century or more.

There's a simple voice-and-guitar devotional love song in I Owe It All To You that resonates instantly with the tear ducts before the album ends on two covers - a slate quarry drone underpinning a version of RL Burnside's rural blues Long Haired Doney and the elaborate, almost rococo (at least by comparison to what has gone before), setting of Sony & Cher's Baby Don't Go.

Some Things Just Take Time is a one of those records that will live with you for a very long time indeed. Be prepared to meet a friend for life.