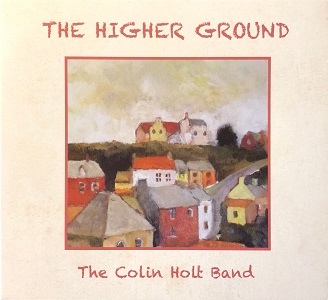 
"The Higher Ground" is the second album from this accomplished band that I have reviewed having previously also appraised album "Chasing Ghosts" back in 2018. I really enjoyed that album and feel the same about this latest offering. One slight niggle though is that in 2018 I referred to their website as being a holding page and it is slightly disappointing to see that the status remains the same today. Perhaps they are concentrating more on their music than their self-promotion?

The band comes from Newcastle Upon Tyne, the North East's home of music, and delivers a delightful fusion of folk, soft rock and just a little touch of jazz. Formed in 2005, the band maintains a very strong and loyal following in the North East, as you would expect, particularly for their live performances.

Colin has once again written most of the songs and created the artwork for the CD cover. He sings all the songs, plays the guitar and writes very thoughtful and insightful lyrics about his region, love, relationships and just a wee bit of politics. Colin is a man that cares about life and its injustices, all of which are reflected in his music. He is supported by five brilliant musicians including the famous saxophonist Snake Davis whose skill is renowned and who adds so much to the sound of the band.

The band consists of Miles Keith, Doug Tones, Phil Udall and Chris Parkinson all of whom deserve individual praise and recognition.

The ten tracks on the CD all offer something different and if you want to listen to just one track to see if you will like their brand of music, try "Girl In The Station" which features Snake Davis and is just simply magical. "Henrietta's Shoes" is a delightful song about watching your children develop. The simple but effective guitar work on this track perfectly matches the gentle tone of the song and it includes a lovely accordion riff to make it just about perfect. "Waiting For The Sun" is a song that has been through a number of changes and now finishes with a Snake Davis sax solo, "blowing a storm" as Colin states.

The album closes with an upbeat track, "The One That Got Away" and finishes the album off in superb fashion making the listener feel so much better about life and wanting more, at least it did me!