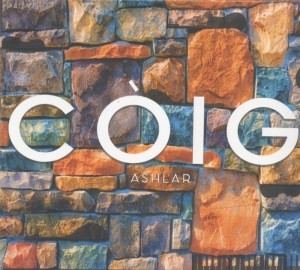 
Còig are an Canadian Celtic traditional band, playing music that’s from a variety of sources, but always infused with an energy and sparkle. ‘Time And Tide’ the opening set, shifts subtly from reflective piano and fiddle music, to insistent banjo to furious dance music. ‘Deep Down In The River’ with Rachel Davis’ wonderful voice to the fore, is more reflective, think Crooked Still’s harmonies and brooding Bluegrass music.

Again the playing, picked guitar and sweeps of violin on the quiet passages are atmospheric and beautiful. ‘Uncle Leo’s Jigs’, with tunes by Michael McGoldrick and the playing of Julie Fowlis, manages to have a foot either side of the Atlantic. The picked mandolin and guitar bring a flavour of America and the fiddle the European tradition. ‘Farewell Trion’, is an old time tune, given depth and gravitas by Crissy and Rachel’s fiddles, Darren’s rich guitar and Jason’s classically flavoured piano. You’ve got to love a band that can make you listen and jump up and down, sometimes in one track. ‘The Capable Wife’, from Kate Rusby’s version of ‘The Old Man’ is a glorious folk tale about the division of labour and humility. ‘From The Old Tapes’ is a set of strathspeys and reels with a piano opening that owes as much to the playing of Dave Brubeck as the Scottish tradition.

This is music shot through with the thundering feet of dancers. Rachel Davis delivers the gloriously evocative gaelic lyrics on ‘O Luaidh’, while the rest of the band deliver charged but restrained accompaniment. ‘Mystery Groove’ is a set of tunes steeped in history. Rachel credits her grandfather with inspiring her to start playing and Darren plays his acoustic guitar and his uncle Charlie’s nylon string on this track. If only the vintage instruments could talk, what stories they would tell, perhaps on this track they do.

Darren sings the band’s version of Canadian songwriter and performer institution Gordon Lightfoot’s ‘Home From The Forest’. ‘Odds And Ends’ suggests a scraping of the barrel, and not the rich and inventive mix of picked jazzy guitar, piano and mouth music that closes the album, up tempo and inventive to the last.

Deep Down In The River