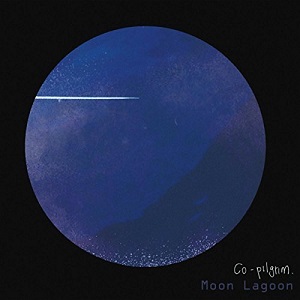 
Fronted by songwriter Mike Gale, Co-Pilgrim are leading lights of Oxford's cosmic country scene, backing vocalist Claire Bennett being married to guitarist and keyboard player Joe Bennett who is also part of The Dreaming Spires. This is their fourth album in as many years and one that finds them in fine fettle, opening up with the wonderful blurry, 60's psychedelia fuzzed guitar country of 'Turn It Around'.

They're a little more jagged and staccato with 'You'll Look Pretty As a Picture …When the Acid Rains Hits Ya' and its 90s American indie sensibilities (Claire providing shouted interjections) filtered through echoes of The Soft Boys, Neil Young and Brian Wilson (especially in the floating into space midsection) while the seven-minute single 'Cylindrical Fire Escapes' (a title worthy of early Pink Floyd) is a sparse, moody, near instrumental that's in no hurry to build its gradually swelling and eventually tumultuous atmospherics, the mixed back, echoey vocals not appearing until almost three minutes in.

'Moon Lagoon' itself is much more immediate, a scruff of the neck guitar chugger (those vocal yelps back again) that, with that organ line suggests , at least to these ears, the freakier album material of the McCoys. The strings intro to 'Thank My Stars' gives it a 60s baroque air before Gale starts singing backed by sparse acoustic guitar and for some reason I was briefly put in mind of Cohen's 'Suzanne', this giving way to the shortest and most immediate track in the rippling and whimsically titled 'I'm Not a Wallflower, I'm the Wall' with its plucked harpsichord like effects, a number that surely nods to one of Gale's esoteric influences, The Cleaners From Venus.

The propensity for odd titles continues with 'Digging Holes in the Whites of Your Eyes', a five-minute excursion into minimally accompanied languid, dreamy psychedelia as some sort of acid lullaby with Gale's vocals caressing like being stroked by a cloud. It all wraps up in an almost funky groove with the percussive shuffling samba rhythm of 'Wouldn't You Like to Dance' as Joe breaks out the trumpet and Gale invites you to sashay onto the floor. You might not know all the moves, but trust them and let them take the lead.

I'll Turn It Around