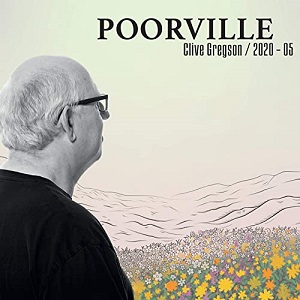 
His plans to release an album a month thrown into disarray, nonetheless Clive's still intending to make it a dozen even if some projects have, of necessity, now taken on different forms. Essentially his Brexit album, this would have been May's contribution and, as such, definitely comes with a spring in its step, kicking off with' I Can't Wait To Do It Again', a chugging rock n rolling swipe at financial chancers always ready to take advantage of an opportunity whatever the consquences for anyone else ("I let the losers make their choices, while I made my pile").

It's a theme revisited later in the album on the classic softly tumbling Gregson melody of 'The Rules Don't Apply' about those who feel a sense of privilege, whether that be through wealth or some form of talent, as he sings how "if you come from easy street, the rules don't apply" as they walk to a different drum, while beating others over the head with the sticks.

The economic divide is another reccurring issue, first in the calypso lilt and bluesy guitar of title track, written after watching an interview with then PM Theresa May and her investment relationship manager husband, the song channeling the government view that, while "The work went down the river", the country's not got a poverty crisis, talking of how "we're all in this together" while practising "every man for himself" .

Then, later, 'Tell The Tale' returns to the subject ("Bills pile up behind the door…,You buy your food at a car boot sale"), inspired by finding that life expectancy in the UK is apparently, around nine years less for those living in poverty. Maybe that's a blessing.

Plunging further into that image of a country gone to shit, the punchy Brexit-based strum 'Talk You Down' opens with him declaring "these days I can barely tell the bad stuff from the good" and going on to mix his metaphors with how "the lifeboat is shot full of holes, it's either sink or drown" and "we're all out here on the ledge, I'm not about to talk you down" as we go partying into the abyss ("Well, last one left, turn out the lights, shut down the life support/It's the final happy hour, here in the last resort").

Touching falsetto notes, the album's most direct Brexit number, though, is the wistfully fingerpicked, Celtic-shaded slow sway 'Bonnie Brittania' which reflects on a changed nation ("Your house has no walls, no floors and no roof/Your spirit has followed the way of all flesh") , where "When poor people plead, you turn away/But when millionaires pilfer, you turn on the charm".

Switching issues, the gently fingerpicked 'Borderline' conjures Ralph McTell as he turns attention to the refugee crisis and a world ruled by marks on a map ("every hour of every day/Someone's dreams die on the vine/When it comes to living free/Maybe we're all borderline"), then the shimmering melancholy of 'Coffee In The Morning' offers a love letter to the approximately 1 in 4 people in the UK who'll experience a mental health problem each year, like the Sally of the lyric for whom, "every day's another hill to climb, still it helps to pass the time".

Accompanied by electric piano, 'I Hope I See That Day' briefly pauses for a burst of relentless optimism ("Who knows, the time may come when peace breaks out…Who knows, there'll be food enough for every mouth… Who knows, there'll be a roof over every head"), but then it's back to reality with the breezy 70s guitar pop of 'I Get Up In The Morning', a first person account of homelessness ("Here in this neighbourhood, I don't fit in/I'm like a piece of trash blown in on the wind") written after seeing a rough sleeper being harassed in the centre of Manchester and featuring a 'My Sweet Lord'-style guitar break. I also feel duty bound to mention the line about the rat faced dog - "I call him Boris, he eats my money/I treat him like a king".

Another slow march sway, the penultimate 'Dreaming' brings things back to mental health concerns, here touching on dementia ("She's leaning out the window of a German car in flight/Waving to an imaginary crowd/And as the streets of someplace else slip slowly out of sight/No-one says a single word out loud") and the high male suicide rate ("He's counting up the friends he's lost on the fingers of both hands/If only he could keep it down to ten") but balanced (in a lyrical node to Lennon) with another blast of optimism, envisioning a world "never torn apart by famine, cruelty and war".

And that's the note on which he ends with 'The World Is A Beautiful Place', a number about reaching out to one another ("I don't care where my neighbours come from…I offer my hand, wish them well") and the realisation that it may not be the planet facing extinction but us, but while we may be "only passing through…while we're still walking this earth on our way/Let's do whatever we must". Remember, while the castle gates may be barred to those not on the list, in Poorville every door is open, a welcoming spare seat at every table.

I Love This Town