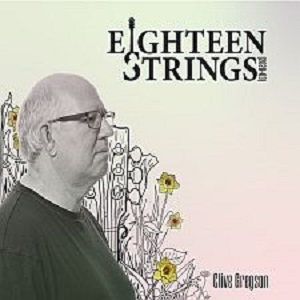 
The third of Clive's monthly CD releases in this his annus mirabilis is an album of guitar instrumentals. Maybe that's not what you might expect from a guy whose biggest claim to fame is that of arguably one of the finest contemporary songwriters of our age - but then, why shouldn't he allow himself the luxury of a little indulgence as part of his year of celebrating retirement from live touring? And after all, folks might just probably need reminding occasionally that Clive's a master guitarist of the standard that surpasses that of the vast majority of his fellow singer-songwriters - it's just that he doesn't need to shout about it or emphasise that virtue when his recordings are always so masterfully created on all levels.

As for the origin of the 14 pieces on this new album, then, Clive tells us that he wrote most of them when he together with Plainsong colleagues Andy Roberts and Mark Griffiths was prepping the Strings Attached album he made with them back in 2014 (and which itself threw a curveball in terms of expectation for all that it was well received). For one reason or other, these particular tunes didn't make the final cut for the Strings Attached album, so here, at half-a-dozen years' remove, Clive has revisited his original demo recordings, "tidied them up" (your guess is as good as mine, but - knowing Clive - I can believe that modest process has involved more painstaking mixing and matching than the ear might initially appreciate!), and gathered together for this album release. Clearly, it's a case of "the fish John West reject", for what might be considered sweepings from Clive's cutting-room floor go to make up a collection of pieces that you'd think no other guitarist (even the professionals) would feel ashamed of releasing.

Clive's acutely aware of, and respectful to, his musical heritage (all genres) as well as the sonic and expressive possibilities of each of the 11 different instruments he identifies here for the benefit of "guitar nuts" - guitars whose special tones are superbly delineated and spotlit on these tracks. At all times the listener is aware of Clive's unassumingly breathtaking artistry, but never obtrusively so. But Clive keeps the listener guessing by providing brief and often cryptic titles for these pieces which often give precious little clue as to their contents or styling. The opening track, Guelph, is a typically earworm piece displaying Clive's gift for economy of expression, and musicality effortlessly overrides technique. Magnet starts out with a Found Harmonium soundalike figure interspersed with harmonics and inventive new entries coming at the ears from every which way over three glorious minutes. Yellow Eyes might've worked well in Hank Marvin style, but it's a prime example of acoustic twang nevertheless (and comes complete with obligatory cheeky key-change midway through). If I'm honest, I could also imagine Hank swaggering through Bulldog (look upon it as a higher-register homage to FBI?). The English Abroad is one of those jaunty dash-off strutters that sounds obvious until you think about it or try to replicate it yourself (ha!). Bold Mountaineer capitalises on a delightful progression in the third measure of its otherwise conventional twelve-bar structure, and even stretches to a false ending. Offside kicks off with a RT Al Bowlly riff, but soon develops its own insouciant melodic identity. Clive's penchant for quirky titles is exemplified on A Texan With A Pair Of Nylons (maybe he'd been stocking that one up?!), which built around a series of sweet descending scales, whereas Green As Grass slips and slides along companionably, jazzier undercurrents propel the restless Tatterdemalion, and Antonio sounds to be a genial transcription of a pop song. The gentle folky mode of Washing Day could have been an interlude on a Richard Thompson album, and the heat of the moment cools down just a touch for the softly Latin/Mex swaying inflections of 102F.

Eighteen Strings might be considered a relative byway on the road-map of Gregsongs, but it's no stagnant creek, instead a thriving tributary whose fresh waters flow into and inform the major routes of his creative endeavours, and as such is an integral part of the jigsaw of his œuvre. Importantly, it's also tremendously enjoyable - and eminently repeatable.