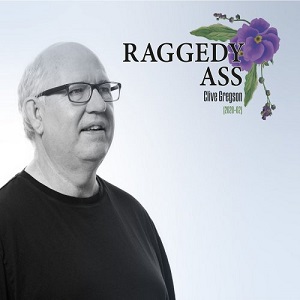 
The second of the twelve albums he's releasing on a monthly basis throughout the year, this is his rock n roll one in the vein of the early Any Trouble releases, the songs originally written for a proposed electric album by 3 Boxes, featuring his former Plainsong colleagues Andy Roberts and Mark Griffith. That never materialised, so now they form an album titled after the name of his new band, but, just to confuse matters, none of them actually play on it with it all being Clive's own work.

It continues the winning streak of its One Year predecessor, opening with a number that's featured in his live set for the past couple of years, the slapback rocking 'Elvis In '56', the title pretty much telling you what it sounds like, although The Beatles '62 and Dylan '65 get a mention in there too.

It's probably tiresome to keep turning out the Richard Thompson comparisons, but the fact remains that, primarily in the uptempo material, they both often make similar sounding music and share a certain vocal delivery, so I'm afraid you'll have to bear another one in relation to 'Little Black Dress', a song about a rags to riches self-reinvention through the media ("You walked right out of a back street slum into the arms of a grateful nation…Such a glorious fake, how you looked the part…But I remember when your nails were chewed/Your teeth were crooked and chipped/When your heels weren't high and your words were crude/When cigarettes stained your lips") and the social whirl from the jetway to the catwalk. I'm sure everyone will have their own celebrity in mind.

Jangly guitars permeate 'Another Summer Of Love', a vintage Any Trouble sounding track in a call to revisit the Woodstock nation era when "all that really matters is the rush of rock and roll, sex and drugs". Then there's a mild Stonesy strut to the end of relationship bemusement of 'Blow It All Away' (indeed, that may well be a wood block cowbell surrogate at the start!), before slide and goodtime bluesy walking beat carry along 'The Darwin Shuffle' with its wry spin on contemporary evolution ("It's a zoo in here but it's a jungle out there") where "You got nothing to fear but life itself".

A McGuinn-like guitar chime introduces the slow waltztime 'Yankee Girls Do Dixieland', another instant Gregson classic with its acerbic lyric about a certain breed of privileged Americans indulging in the hedonism - and networking of Spring Break, as, "smart as a whip" with daddy's credit card in hand, they head down south where "they learn how to drink and they learn how to dance/To the Allman Brothers Band/Smoke the strongest weed, snort the finest blow" before they "all become lawyers, mothers and wives" with the world "at their command".

Riding a keyboard trill, the summery bounce of ' If It's All The Same To You' stays down "below the Mason-Dixon line, Carolina on my mind", heading into the rhythmic chug of 'Has Anybody Seen That Girl', where, when the girl and the guy break-up, the natural response of any self-respecting musician is to "Drink another beer, write another song".

The album heads into the final stretch with the mid-tempo reflective 'East of Midnight' ("you may well wonder how we wound up here/Washed up in the twilight of another missing year") and another perfectly succinct guitar solo, while the dawn of a new day brings a sunnier perspective ("I love these mornings, when the rain's just stopped falling, The small birds come calling, the cats got the cream") on the country lazing acoustic strum and dobro flourishes of 'Living The Dream' complete with Lone Ranger references.

It ends, appropriately enough, with the nimble fingerpicking and airy feel of the superb and emotionally understated 'Last Farewell', which, kind of echoing Rudyard Kipling's If with each line starting with 'when', is essentially about cutting your losses "When all life's troubles pile up at your gate/When bitter words are the only truth to tell" and "When everything is said and done, when every card is played" and moving on without looking back. So, another month, another great Gregson album. Roll on March.

I Love This Town